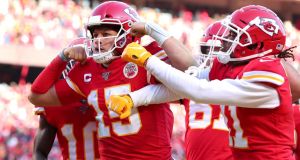 Patrick Mahomes celebrates a touchdown as he inspired the Kansas City Chiefs to the Super Bowl. Photograph: Tom Pennington/Getty

Raheem Mostert rushed for four touchdowns as the San Francisco 49ers beat Green Bay 37-20 to book a spot in the Super Bowl where they will face Kansas City, who advanced to the NFL championship game for the first time in 50 seasons with a 35-24 win over Tennessee on Sunday.

Kansas City quarterback Patrick Mahomes was instrumental in their victory in the American Football Conference championship game, breaking the Titans’ backs with a dazzling 27-yard first-half touchdown run as the Chiefs overcame a 10-0 deficit.

Mahomes, who also threw three touchdown passes, gave the Chiefs their first lead at 21-17 with the tackle-breaking run with 11 seconds left in the opening half.

They went on to dominate the second half, chalking up their eight consecutive win to earn a berth in February 2nd Super Bowl to be played in Miami.

Kansas City has not been to the title game since January 1970 when they defeated the Minnesota Vikings 23-7 in the fourth Super Bowl.

“To be here, to be a part of Chiefs Kingdom and to be able to do it here at Arrowhead, these people deserve it. And, we’re not done yet. We are going to get it (the Super Bowl title).

Tennessee, the surprise package of the playoffs with a sixth seed, scored the game’s first 10 points on a field goal and Derrick Henry’s four-yard run.

But the Chiefs, as they had in overcoming the Houston Texans’ 24-0 advantage last weekend, rallied behind their quarterback.

Mahomes’ toss to wide receiver Tyreek Hill on a jet sweep brought the Chiefs within 10-7 before Tennessee scored on a one-yard pass from Ryan Tannehill to massive tackle Dennis Kelly.

The Chiefs rolled for the next 28 points.

Hill caught 20-yard pass from Mahomes and the quarterback added his key touchdown run, tiptoeing along the sidelines at times.

“When they are getting double-teamed and there are only three men rushing, and our line are blocking, it gives me room where I can run,” Mahomes said.

Damien Williams then rushed into the end zone on a three-run and Mahomes threw his third touchdown of the game on a 60-yard play to Sammy Watkins.

Tennessee finally showed signs of life on Tannehill’s 22-yard pass to Anthony Firkser with four minutes left, but it was too late for the Titans.

In the National Football Conference championship game in San Francisco, the 49ers relied on the running game to build a 27-0 lead and took a 34-7 lead into the fourth quarter.

Mostert became the first NFL player with four rushing touchdowns in a conference championship game as he scored on runs of 36, nine, 18 and 22 yards, running for 220 yards in total.

Green Bay quarterback Aaron Rodgers, who had 326 yards passing but was intercepted twice and lost a fumble, rallied the Packers to within 34-20 as they scored twice to open the fourth.