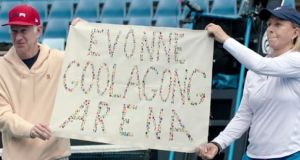 Australian Open organisers have criticised Martina Navratilova and John McEnroe after they staged a protest calling for the name of Margaret Court Arena to be changed at Melbourne Park on Tuesday.

The two greats of the game have been among the fiercest critics of Court for her statements on LGBTIQ matters and, a day after the 24-time grand slam singles champion was honoured on the 50th anniversary of her calendar Grand Slam, they took matters into their own hands.

After Navratilova took part in a legends’ doubles match on the neighbouring 1573 Arena, she was joined on court by McEnroe before climbing into the umpire’s chair to address the crowd that remained.

The sound system was quickly turned off but McEnroe and Navratilova then held up a banner reading ‘Evonne Goolagong Arena’.

Goolagong won seven grand slam singles titles during her career and was a trailblazer for indigenous Australian tennis.

The protest did not impress tournament organisers, who said in a punchy statement: “We embrace diversity, inclusion and the right for people to have a view, as well as their right to voice that view.

“But the Australian Open has regulations and protocols with respect to how any fan, player or guest can use our facility, the event and the global stage it provides. This is to ensure the integrity of our event.

“Two high-profile guests have breached these protocols and we are working through this with them.”

Speaking to the BBC, Navratilova explained her actions were prompted by a lack of action from Tennis Australia and the Victorian Government.

She said: “I thought we got it going a couple of years ago. I thought Tennis Australia would do something — or the government of Victoria, as apparently they are the ones that make the decision — but nothing has happened.

“And Margaret keeps doubling down in basically attacking the gay and lesbian community. My wife Julia said, ‘You’re complaining about it, but what are you going to do?’

“And I’m like, ‘I’ve done everything I can do. I’ve written a letter, I’ve been very vocal’, and then when I landed here, and I came to the courts, I had this idea.

“I stopped in an art shop and got a canvas and some coloured pens and started colouring ‘Evonne Goolagong Arena’ on my hotel table in the Aboriginal version — a very amateur version of Aboriginal art — as an honour to Evonne Goolagong and where she came from.

“John, I ran into him, and on the spur of the moment I asked him because he also talked about renaming the arena. He’s been very supportive of social change in tennis, so it was perfect.

“I wanted to be respectful, but most of all I just wanted to push the conversation forward again.”

Navratilova also expressed her views in an open letter on tennis.com, saying: “When airports, buildings, streets or stadiums are named after particular people, it is done, or at least should be done, to honour exceptional human beings — our heroes.

“Think Muhammad Ali, Nelson Mandela, Martin Luther King, Billie Jean King, Rod Laver, Rosa Parks. Would it not be appropriate if the Staples Center were renamed as a tribute to Kobe Bryant?

“Such luminaries excelled in their fields and transcended them; they made a positive contribution to mankind; they led by example. And, perhaps most of all, they were on the right side of history.

“But Margaret Court does not belong in that company or category. Nobody disputes her achievements on the tennis court, and her place in the sport’s history remains as distinguished as it gets.

“Nobody wants to take away or diminish her career, least of all me. Margaret, Billie Jean and Rod were my childhood heroes. I wanted to be like them. So, it pains me to say this, but Margaret Court Arena must be renamed.

“As a worthy replacement, my vote goes to Evonne Goolagong. Evonne is the embodiment of what a role model or hero truly is.

“Her heritage, her success against the odds, her Hall of Fame career and her exemplary life off court, in which she has given so much of herself to so many causes, are all attributes we can celebrate wholeheartedly.”

McEnroe had used his platform on Eurosport to hit out at Court ahead of the ceremony on Monday.

McEnroe described the 77-year-old as the “crazy aunt” of Australian tennis, saying the only thing longer than her list of tennis achievements was “her list of offensive and homophobic statements”.

Serena Williams’ third-round loss to Wang Qiang means she is still one slam title behind Court, and McEnroe added: “Serena, do me a favour, get two more grand slams this year and get to 25 so we can leave Margaret Court and her offensive views in the past, where they both belong.”

Tournament organisers had been put in a difficult position over how to mark Court’s anniversary having honoured Laver last year.

The ceremony went off without incident bar the waving of a handful of rainbow flags. Court was presented with a replica trophy by Laver but was not given a microphone to address the crowd herself.