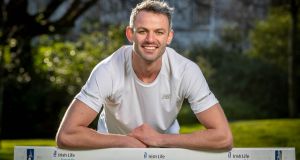 Thomas Barr: “The only thing about Rio is I look back and think it was such a fantastic part of my career.” Photograph: Morgan Treacy/Inpho

Times flies in Olympic cycles and in the four years since Thomas Barr finished fourth in Rio a lot of things have changed.

One thing that hasn’t is Barr’s sense of wonder, only in looking back on Rio and ahead to Tokyo’s start date on July 24th it’s not what if, but why not?

In ways that date has been looming large over his entire life, because it’s also his birthday – Barr turning 28 that same Friday the Games of the 32nd Olympiad begin inside the newly refurbished National Stadium.

Part of the wonder is Tokyo will present Barr with the chance to chase the Olympic medal which fell just outside his reach in the 400m hurdles in Rio four years ago – by .05 of a second, to be exact. His time that day of 47.97 seconds remains his lifetime best, and would have won Olympic bronze in London 2012 and silver at each of the two Olympics previous to that.

“I’m not bitter at all that the time I ran could, potentially, in another year have won me a medal,” he says. “I’m more so racing my own times and personal bests.

“I was going through pictures of Rio, and there’s me coming through in the semi-final in first position and Karsten Warholm (from Norway) is in fourth. I thought ‘oh my God, how things have changed’. He is now a double world champion and European champion.

“So the event has pushed on a lot in the last two years, to a point to which it’s possibly never been, to have two guys running sub-48s consistently, but that brings us all on, and it’s nice to be involved in such a high-calibre event.”

Why not think of a medal? Barr did win European bronze behind Warholm in Berlin in 2018, his motivation for Tokyo deepened after missing (by two places) the final of the World Championships in Doha last September.

There could be another sense of wonder, given Rio second-place finisher Boniface Tumuti from Kenya, who ran a national record on 47.78 in an event where Kenya had no tradition, hasn’t broken 50 seconds in the years since, and appears to have dropped off the circuit completely, though still only 27.

Considering Kenya’s anti-doping record since Rio, athletics team manager Michael Rotich banned for 10 years for providing advance notice of doping tests, and last year alone, 15 top Kenyan athletes banned for doping offences (adding to the 138 Kenyan positive tests between 2004 and 2018, the number of Kenyans currently banned for four years hovering close to 50), there is that wonder: what if?

“We haven’t really seen him [Tumuti] since then, he wasn’t a very prominent figure leading up to that, so it is frustrating to think there could have been foul play involved. And to think that there are athletes who are doping, or potentially doping, and getting away with it and racing at different events. At the same time, it doesn’t really affect what I’m doing on the track because I can only hope that eventually they’re caught out.”

Nor, it seems, does Barr ever wonder who that next Kenyan positive might be.

“No, I don’t lie awake, it doesn’t bother me, doesn’t worry me. Because I almost feel fourth place in Rio wasn’t a place I should be anyway. If it was a place I feel I should have been potentially my outlook might have been different. The only thing about Rio is I look back and think it was such a fantastic part of my career.”

Thomas Barr was speaking as an ambassador FOR the 2020 Irish Life Health Schools’ Fitness Challenge: for more see www.irishlifehealth.ie/fitnesschallenge