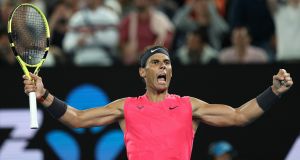 Irrepressible but outmatched, Nick Kyrgios departed the Australian Open with a fourth-round defeat at the hands of world No1 Rafael Nadal, who took the match 6-3, 3-6, 7-6, 7-6 at the Rod Laver Arena. Containing some of the most thrilling tennis of the tournament, the three-and-a-half-hour tussle reached fever pitch in an electric third set, which Nadal won in a tiebreak, then chiselled his way to victory. Resilient in defeat, Kyrgios lost no fans.

After a scrappy start, Nadal broke as early Kyrgios’s second service game, a drawn-out affair and a microcosm of the night, in which the Australian veered between his brilliant best and frustrating worst: twice he erred with drop shots when he had his opponent on the ropes. Quirky and captivating as ever, Kyrgios looked outdone for both power and precision in the early stages. Scything forehands that had flashed past his previous opponents’ rackets were now coming back with interest. His unpredictability, previously his trump card, now seemed to be confusing Kyrgios himself more than his opponent.

There was also the curious case of the Australian’s approaches to the net, whose frequency are a tactical mystery at the best of times, because he’s not an especially gifted volleyer. Here they looked like suicide missions: five of them in the first set won him just a single point, and after 36 minutes Nadal had taken it.

It usually pays to not read much into the preliminaries at blockbuster matchups like this, but a stadium announcer had the bright idea of asking the crowd who they were barracking for just before the players’ arrival. The question elicited a clear verdict: the roar for Nadal was twice as loud as that for the local. Perhaps it merely spoke of the triumph of commerce over patriotism: even via official channels, general admission tickets for this match were selling for 480 Australian dollars.

But it said something else just as clearly: centre court is for winners. No longer could Kyrgios draw inspiration from his motley supporter base in the cheap seats across at Melbourne Arena. From the outset, Nadal’s supporters loudly reminded him of the events in Acapulco last February. Kyrgios actually won that battle, underarm serves and all, but Nadal claimed afterwards that he “lacks a little respect”, which on one hand is a little like saying the sky is blue, and on the other, a little beside the point of Kyrgios. The animus between the pair is longstanding and genuine.

The second set tonight began inauspiciously for Kyrgios, who bungled his way into a marathon service game, quickly presenting Nadal with two break points. Already it felt like crunch time. The Australian saved them both, the second with a ’tweener that thrilled the crowd but could just as easily have lost him the point. “Say something!” he screamed at his player box soon after. What was really needed at this point was for Kyrgios to do something. Eventually he did, holding his serve, but it was a lot of hard yakka just to stay in the match.

What followed went against both the early momentum and basic probability. Kyrgios reached desperately and floated a forehand winner down the line to break Nadal’s serve and lead 3-1. There followed two Kyrgios aces, and just past the hour mark, as he held serve with an emphatic love game, the momentum was tilting. Serving for the second set, Kyrgios sealed it with a pair of aces, wrapping it up in 46 minutes. Now he’d won every net point for the set, and walked to his chair with dead-eyed focus.

At one set apiece, it was not unreasonable to expect that the match could rise in both intensity and quality, but the third set had the effect of making much else at this tournament seem pedestrian. Kyrgios chased like never before. Nadal unleashed his full armoury. Fans sat with their chins on steepled fingers, or gasped, or both. Facing a diabolical break point that would have seen him trailing 5-3, Kyrgios opted for his most outrageous drop shot of the night and succeeded, then emphatically held serve. Next up he did everything but break Nadal, but somehow it stayed on serve. Then Nadal did everything but break Kyrgios, but somehow we had a tiebreak.

The tiebreak was manic. Down 3-1 in a flash, Kyrgios smashed his racket into pieces and threw it to a fan in the front row. The fan dropped it. The mistakes were contagious. Both players missed the sort of put-aways they’d nail 99 times out of 100. From 4-1 down Kyrgios drew level at 5-5. Then he double-faulted, and Nadal, on serve, had his chance to seal it. To howls of shock, he double-faulted too. But with a wild forehand, Kyrgios conceded the set in 72 of the most compelling minutes of the tournament. Nadal’s brilliance is so well honed at this point that his part in the show was entirely expected. That Kyrgios was so close to the mark meant he’d performed well above expectations.

With that, Kyrgios’s chances seemed to have passed and you felt that Nadal’s ruthlessness would come to the fore in the fourth set. The Australian’s serve deserted him completely at one point and Nadal had the early break. Leading 4-2 in the deciding set, he even stopped to enquire after the health of a prostrate Kyrgios, like the guy who reaches for the restaurant bill after someone else has put their card down. But there was another twist in store. Serving for the match at 5-4, Nadal conspired to hand Kyrgios two break points and the Australian pounced. The battle was alive again, and destined for another tiebreak.

Not for the first time, when faced with the dilemma of what approach to take, Kyrgios threw the kitchen sink at everything in his path. Some of his forehands were like windmill punches in a bar brawl. At 3-2 his method seemed to be working, but Nadal weathered the blows and forged ahead. A thumping body serve brought him two match points and only one was required. Barmy and brilliant until the end, Kyrgios had fired his final rounds. From here, Nadal will face Austria’s fifth seed Dominic Thiem in the quarter final, while Kyrgios departs with $300,000 and a decent launching pad for his season. Again, he bled from his endeavours.

What was evident tonight, and what Kyrgios’s remaining detractors don’t understand, is that modern sport is not just about winning, losing and giant pay cheques. Sometimes it’s also not about noble concepts like sportsmanship or honouring the game. Its central place in the culture is reliant on precisely the kind of star power that Kyrgios and very few others bring to the tennis – what he brought here. Not just his skill, but his volatility, his incandescent glow, and his complete otherness among conventional, dependable winners like Nadal. Kyrgios is playing their game but he is not of it. The result is that he attracts the eyeballs of people who could take or leave tennis otherwise.

“Against Nick, you are never under control,” Nadal said afterwards. But at 24, Kyrgios is yet to go close to claiming the grand slam trophy of which he is capable. In this Australian summer, displaying a patriotic fervour and no small amount of guts, he has at least won some of his home country’s coldest hearts. - Guardian