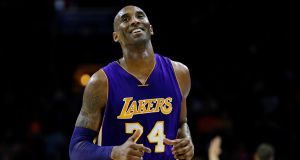 Mourn Kobe Bryant because he was your favourite player (or your friend’s, or your brother’s, or your daughter’s), and mourn him in spite of the fact that he was flawed – more flawed than some, less than others. It is not a prerequisite for mourning that the man gone too soon is faultless. Bryant was not that, which is as important to remember today as his basketball brilliance, his devotion to his daughters, his post-career arc that was just beginning.

In July 2003, police in Eagle, Colorado arrested Bryant, then 24, after a sexual assault complaint. Bryant, who was married at the time, first denied that he’d had sex with the 19-year-old woman; then, he admitted to what he said was a consensual sexual encounter. During the months of pre-trial discovery, Bryant’s accuser was smeared in the media, and eventually, when she declined to testify, a judge dismissed the criminal charges. The woman then filed a civil suit that was settled privately.

“Although I truly believe this encounter between us was consensual, I recognise now that she did not and does not view this incident the same way I did,” Bryant said in a statement the day the criminal case was dismissed. “After months of reviewing discovery, listening to her attorney, and even her testimony in person, I now understand how she feels that she did not consent to this encounter.”

Bryant’s statement wasn’t an admission of guilt, but it was a nod to something unseemly that much of the world promptly forgot. I did, a teenage girl at the time, just four years younger than Bryant’s accuser. My friends yelled “Kobe” as they tossed balled-up sandwich wrappers into trash cans, and I felt no righteous indignation as a girl, as a human, as someone who’d grow up to have little patience for the rampant disregard of victims that’s so present in sports – and the world in general. For my generation, Bryant was an icon.

I recall gawking at photos of the purple diamond apology ring he bought his wife and moving on. When I began to cover the NBA in 2011, I was impressed on the five or six occasions I talked to Bryant at how deftly he explained the game to a clueless kid reporter. I never once thought about Colorado. Maybe it wasn’t relevant to the questioning, though I’d argue now that a superstar settling a civil sexual assault case is relevant to most conversations about his life, his legacy, even his play.

In 2003, the #MeToo movement was 14 years in the future, almost inconceivable. The public consciousness as it related to consent was less assured. It’s impossible to imagine the news cycle had the whole ugly story unfolded today – and that’s hardly a productive thought exercise. But there’s no question: it was easier then to forget, acceptable to move on and allow what Bryant did on the court – All-Star nod after All-Star nod, an MVP in 2008, his fourth and fifth NBA titles in 2009 and 2010 – to overshadow the discomfort, the anger, the dissonance of it all.

The NBA never punished Bryant, nor did the league conduct any kind of investigation. That wasn’t the playbook. Life, hoops, just marched on. Even in 2015, when Bryant revealed that he cultivated his nickname, Black Mamba, as a way to split his personal and professional lives, few blinked.

In a documentary, Bryant said he conceived of the Mamba alter-ego to remove himself from criticism after his arrest, as a trial loomed. That’s understandable, but it’s just as uncomfortable, because there is no separation: the Kobe Bryant who scored 81 points in a game and another 60 on his final night in the NBA is the same man who at the very least, according to his own statement, made a woman feel that she did not consent to a sexual encounter. Any survivor can tell you: that is not a minor detail to be tossed to the cutting room floor.

You’ll read a lot this week about what Bryant did after his retirement, or even after 2003, when his life resumed after barely a tremor. You’ll read about his four daughters – one of whom, 13-year-old Gianna, died in the same helicopter crash – and how he became such an active, doting father once he was no longer subject to the grueling NBA schedule. You’ll read about his advocacy for women’s sports, for the arts. You’ll hear about how he was able to leave his maniacal focus behind, how he became a coach, a teacher, a generous fan of the NBA’s next generation.

You won’t read as much about 2003, and you’ll find no discussion at all about how Bryant processed it, improved from it, took any lessons he learned from it into the world. Being a wonderful father – that’s not absolution. There’s so much more Bryant could have done: at the very least, he could have spoken publicly, especially as sexual violence began to drive the news cycle in sports and elsewhere over the past five years, about respecting women. Instead, he told the world to respect women’s sports – an important sentiment that falls a mile short.

Bryant got a second chance. He used it to play his way into the conversation as one of basketball’s all-time greats. There was never another criminal accusation directed at the superstar. He was a family man, a businessman, a man who sat on Jimmy Kimmel’s couch and told the world with a look of satisfaction that his daughter would carry on his basketball legacy. He charmed. He moved on – perhaps more completely than he should have been allowed to.

Mourn Kobe Bryant, or don’t. But if you do, mourn the whole picture of a complex man, good and bad, transcendent and as disappointing as only someone wholly human can be. – Guardian