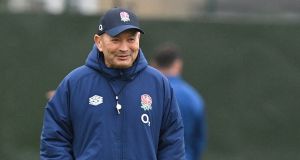 Jackie Tyrrell is edging towards the maroon corner in Saturday’s All-Ireland hurling quarter-final between Galway and reigning champions Tipperary. Conor Whelan, he feels, will be the difference. In his column this morning the former Kilkenny defender explains why this has the feel of a blockbuster: “these two teams have served up the best series of games of any two counties in the past five years. They have their own storylines, their own images that jump immediately into your head.” The ties of the Bloody Sunday massacre in 1920 will bind generations this weekend as both Dublin and Tipperary - the two counties who were at the heart of the day 100 years ago - will mark the centenary with a special jersey in their provincial football finals.

Eddie Jones was up to his usual tricks ahead of Ireland's encounter against his England team this weekend. Talking to the media he highlighted the refereeing of scrums: “we’ve got a referee on the weekend who generally doesn’t reward dominant scrums so it’ll be interesting to see how he looks at that area.” Gavin Cummiskey explains why the build-up would be all the poorer without Jones whispering sweet nothings and creating false narratives. England have named their team with Jonathan Joseph returning.

1 Sinn Féin TD Brian Stanley apologises for ‘inappropriate’ tweet
2 Government may yet face hardest call on Covid-19 restrictions
3 Coronavirus: Donnelly warns State entering ‘uncharted territory’
4 Maureen Dowd: A brother’s lament for Donald Trump
5 Older men’s fixation with younger women really boils my kidneys
6 Greek potatoes: Incredible served with lamb chops and tzatziki
7 Ireland 23 Georgia 10: How the Irish players rated
8 Late Late Toy Show duet with musical hero ‘absolutely mad’ says delighted teen
9 Ireland’s autumn of discontent continues with abysmal Georgia showing
10 Sordid murder of hurling brothers still resonates in south Galway
11 Majority of Dublin’s Airbnb-style lets return to long-term market
12 Michael J Fox: ‘In the wheelchair, I’m luggage. No one listens to luggage’
13 400 – yes, 400! – Irish retailers for all your online Christmas shopping
14 TV guide: 22 of the best shows to watch this week
15 ‘If you apply for a driving test now, you might get one by June’
16 OECD unclear how ‘rigid’ Leaving Cert prepares students for future
17 Almost 730 consultant posts vacant, say doctors
18 Vaccine rollout could begin early in New Year, says Donnelly
19 Gardaí investigate George Gibney over abuse allegations
20 Almost 7,500 people avail of ‘Man in a Van’ grant
21 Jim McGuinness: There is a way to save championship and make it competitive
22 John Boyega’s ‘Jedi’ copper makes a lone stand against racism
23 Life under Level 3: What stays open and where can I travel?
24 Nicky English: No surprise that Limerick and Waterford in final
25 Mind that cat – and its impact on wildlife
26 Dublin docklands residents urge refusal of 15-storey social housing tower
27 Ireland’s teenage pariahs: ‘We are really at breaking point now’
28 Adam King’s family ‘blown away’ by response to Toy Show appearance
29 Basic income for all: Has the Covid crisis given us a new economic model?
30 David McWilliams: We need to reinvent our empty city car parks
31 Northern Irish businesses ‘horribly exposed’ by Brexit ‘mess’
32 Viggo Mortensen: It ‘felt awkward’ replacing Stuart Townsend in Lord of the Rings
33 Wet pub openings fuelled rise in Irish Covid infection rates – report
34 Only way is up for Stripe as valuation skyrockets
35 Ireland grind their way to grisly win over Georgia
36 Donald Trump questions if Supreme Court would hear election challenge
37 My pet and me: ‘They just make everything better’
38 Helena Bonham Carter: ‘People choose to sleep with powerful people. I got two children out of it’
39 Reform of legal training long overdue and much-needed
40 Man charged in connection with three deaths in Dublin
Real news has value SUBSCRIBE