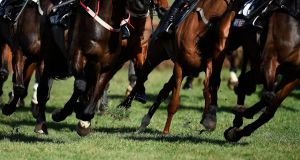 Advice from Britain’s racing authorities that horses shouldn’t be moved between the United Kingdom and the European Union for at least the first two weeks of 2021 is a sign of Brexit coming to a head.

That’s according to Horse Racing Ireland, the industry’s ruling body here which conceded on Tuesday that the sector is facing into a “potentially very big problem”.

HRI’s chief executive Brian Kavanagh said on Tuesday: “We are watching the talks in London and Brussels very carefully. Then obviously there is the situation that will apply after January 1st, depending on the outcome of the talks.

“So it is coming into the current time frame rather than something that will happen in future.

“It is not ideal but it was always going to happen once the decision to leave was made. We have to manage the process that arises from that.”

Kavanagh’s comments came on the back of a statement from the British Horseracing Authority outlining advice from its Brexit steering group which is leading cross-channel racing’s preparations for Britain’s departure from the EU.

The advice is for “members of the industry not to move horses to and from the EU unless absolutely necessary for at least the first two weeks of 2021”.

It said that with less than seven weeks to go before the transition period expires there will be significant changes to how horses move between the UK and EU from January 1st irrespective if a trade deal is agreed or not.

As things stand nothing has been resolved about the UK’s status as a “third country” for animal health purposes following the end of the transition period.

Neither is there agreement on transporters operating in the different jurisdictions or recognition which identifies thoroughbreds and allows their movement as registered horses.

“Even in the event of agreements on these key areas for British racing being confirmed in the coming weeks, the Thoroughbred Industries Brexit Steering Group is of the view that there will be additional friction in moving thoroughbreds through key ports from 1 January, with the potential for initial disruption,” the statement said.

For a sector that has been battling the impact of the coronavirus pandemic, it is a stark reminder of impending changes to moving thoroughbreds, particularly if no deal on a free trade agreement is reached.

Even if a deal is reached, including one that includes a new health status for horses to replace the tripartite agreement that allows free movement between Ireland, Britain and France, Tuesday’s statement from the BHA indicates disruption is still likely.

The tripartite agreement currently allows for more than 25,000 thoroughbred journeys per year, primarily for horses going to the races, to sales or for breeding purposes.

More than 5,000 of those involved traffic between Ireland and France using Britain as a land bridge.

“There is going to be huge change anyway and it is a potentially very big problem,” Brian Kavanagh said. “We will continue to talk to our colleagues in the UK but we knew this was coming.”

Although the first two weeks of January isn’t a particularly busy period for transporting horses, either in terms of racing or sales, the warning about not moving animals unless absolutely necessary for “at least” a fortnight will provoke worry.

The breeding season begins in February while the racing programme steps up a gear that month too on the run-up to the Cheltenham festival in March.

On Tuesday, the chair of the Thoroughbred Industries Steering Group, Julian Richmond Watson said: “We know that some people want to make plans for the new year, but the picture will remain unclear until we know the terms of any new agreements between Britain and the EU.

“Even if there is an overarching trade deal, we will still need specific arrangements to be agreed covering the movement of thoroughbred horses.

“If industry members want to avoid the risk of delays or disruption, we advise them not to schedule movements in the first two weeks of 2021. Our message right now is ‘Stand By, Change is Coming.”