Bloody Sunday: The ties that bind the generations this weekend 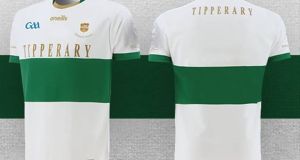 A big weekend beckons for Séamus McCarthy and Tipperary football even if he will only be able to follow it on television.

A former player and manager, he also chaired Tipperary’s Bloody Sunday commemorative committee and like all of us, is struck by the historical symmetry of both Dublin and Tipp, whose challenge match at Croke Park in 1920 was the prelude to slaughter, being in action in provincial finals this centenary weekend.

Michael Hogan was the one player who was killed on the day, and he has been the constant connection between Tipperary and the massacre, memorialised in the eponymous stand in Croke Park.

Details of the county’s schedule of commemorative events were announced last February on the day of the Tipperary-Cork league match. On that occasion Tipp wore the jerseys of the Grangemockler club, which had been worn on Bloody Sunday by the county.

McCarthy says the matter had nothing to do with his committee on this occasion and was driven by the players, who were asked for their opinion by the county board.

“It was important for us to have the jersey produced but it was entirely the players’ decision that they would wear it this Sunday and would be honoured to wear it.

“We were thinking of a Tipperary-Dublin commemorative match in Croke Park when we launched back in February on the evening of a Tipperary-Cork National League match. Who would have thought at the time that the same teams would end up in a Munster final and on the Bloody Sunday anniversary weekend?”

Coronavirus has affected many of the commemorative events but there has been a wreath laying ceremony at some of the clubs whose players had taken part on the day and the remaining clubs will be similarly honoured.

“We were determined as a committee,” says McCarthy, “to remember Michael Hogan but also remember the 17 other Tipperary men because they all suffered to a greater or lesser extent varying degrees of trauma – what we’d now call PTSD – but they rarely spoke of it.

“I met Tony Nolan whose father played on Bloody Sunday and he says his father talked very little about it.”

Dublin, who will play on Saturday evening in Croke Park against Meath in the Leinster final, will mark the centenary with a special jersey of their own and so the two counties, who were at the heart of the day 100 years ago, will mark the anniversary with significant matches.

Sometimes history’s wires get crossed. The reason why a challenge match between Dublin and Tipperary created such excitement in 1920 is that they were the two best teams in the game and would contest that year’s All-Ireland final even if it couldn’t be played for a further two years because of the turmoil of the times.

On June 11th, 1922, Tipperary won what remains the county’s last football All-Ireland title. It’s all in the past but at that stage Tipp were joint-second in the roll of honour with five titles, as were Kerry and Wexford, trailing front runners Dublin on 11.

“We were very much at that time a top county,” says McCarthy. “We had been in the All-Ireland final of 1918 against Wexford in their great era when they did the four in a row. We were missing players because of Spanish flu.”

That further historical echo in the current age of pandemic strikes another chord. Tipp’s top scorer Davy Tobin was among those stricken and couldn’t play.

“Emigration came into it as well. It was a difficult time when the new State was founded. We were losing a lot of people but not just because of Bloody Sunday, although it had an impact.

“Five of that team ended up going to America and three died. Two died in the Troubles, Jim Egan and Jackie Brett and Michael Hogan on Bloody Sunday. That was half a team gone and ensured a major transition for Tipp. We won in 1922 but haven’t set the world alight since.

“Two are buried in New York and that commemoration is on this weekend. One of them, Ned O’Shea, was captain on the day. He’s buried in Flushing and Jimmy Doran is also buried in the city. There’ll be a wreath-laying there this weekend.”

He appreciates the ties that bind the generations. As Tipperary manager he twice led the county to Munster finals, in 1993 for the first time in nearly 50 years and also a year later, and remains ambitious for the county.

“Up until the last couple of years when Cork have won minor and under-20 All-Irelands, we would have matched them at underage. There was the minor All-Ireland won against a Dublin team that had many of their current seniors and an under-21 final. We should be competitive.”

A number of the players were around four years ago when they beat Cork in the senior championship for the first time in 72 years and went on to reach a first All-Ireland semi-final.

“From a Tipperary point of view it would be great if they were inspired by the occasion and 100 years later we could win a Munster title for the first time since 1935.”