2022 World Cup qualifying draw: When is it? What are the pots? Who can Ireland get? 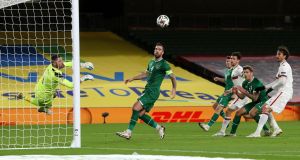 Ireland’s 2020 Nations League campaign came to a close on Wednesday night with a 0-0 draw at home to Bulgaria, marking a seventh consecutive game without a goal and a full calendar year without a win – the first time that has happened since 1971. There are, as we know, numerous extenuating circumstances with 14 absent players the most obvious of them but the fact that Ireland and Stephen Kenny now have a four-month break is likely no harm. Next up it’s qualifying for the 2022 World Cup which will take place from November 21st to December 18th 2022 in Qatar. Here is all you need to know.

When is the draw?

The group stage draw will take place in Zurich at 5pm on Monday, December 7th.

What pot will Ireland be in?

If Kenny’s men had found that elusive goal on Wednesday it would have made a big difference for their 2022 World Cup hopes because, with Serbia beating Russia and Northern Ireland drawing with Romania, it would have meant that Ireland finished the Nations League ranked 20th in Europe and therefore seeded in Pot 2. However, the 0-0 draw with Bulgaria means it’s Pot 3 for Kenny’s team. The 55 teams will be seeded as follows:

And how does the draw work?

So, there will be five groups of six teams and five groups of five teams. Belgium, France, Italy and Spain are guaranteed to be in the five-team groups because they are the four Nations League A group winners and will therefore contest the Nations League finals on one of the World Cup qualifying matchdays.

After that it’s a fairly straight draw with the usual caveats of some teams being kept apart for political reasons, winter venues and excessive travel but none of those affect Ireland.

Grand, so after we’re inevitably drawn with Denmark and Wales, how do we qualify?

Well, after there was every chance given to get to Euro 2020, this quest to get to Qatar is going to be a lot more difficult. The 10 group winners qualify automatically with the 10 runners-up and the two best ranked Nations League group winners contesting the playoffs. Those 12 teams will be separated into three sets of four, setting up two one-legged semi-finals and a final in each with the three winners qualifying for the World Cup.

But for the last Euros we finished bottom of our Nations League group and third in our qualifying group and still got a playoff. Could we manufacture some backdoor route like that again?

Sadly, no. With 24 teams qualifying for Euro 2020 it was significantly easier to get there in comparison to the 13 European teams who qualify for this World Cup. No matter what happens, Ireland won’t be in the playoffs unless they finish second as it is only the two best Nations League group winners who get in and Ireland finished third behind Wales and Finland.

Okay, so when does qualifying start?

And what do we reckon are the best and worst case scenarios for Ireland?

Defending World Cup champions France have just torn through their Nations League group with five wins and just one draw to top the standings ahead of Portugal, Croatia and Sweden so, safe to say, they’d pose quite a test for Ireland.

In Pot 2, Poland held their own in a very strong Nations League group of Italy, Netherlands and Bosnia & Herzegovina and would probably best be avoided.

In Pot 4, Bosnia & Herzegovina were relegated in the Nations League but they were in League A so they’re no pushover, while Armenia are the best ranked team in Pot 5. A five-team group could also work against Ireland as it means there’s no sixth seeded team to (hopefully) pick up two wins from.

A more favourable draw might see Croatia come out of Pot 1 after they just endured a dismal Nations League campaign, losing five of their six games and only beating Sweden.

After a close Euro 2020 playoff semi-final against Slovakia in Bratislava, Stephen Kenny would likely fancy another crack at them from Pot 2.

On a similar vein, Bulgaria – in Pot 4 – didn’t look like any great shakes in the two Nations League draws against Ireland and, with a bit more time under Kenny and a full squad available, at least four points from two games wouldn’t be too much to ask for.

Below that, Andorra – always considered one of the minnows of European qualifying – have made it into Pot 5 while in Pot 6 (realistically it should be six points no matter who comes out of this pot) San Marino are the lowest ranked team in Europe.