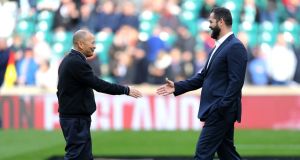 Eddie Jones understands the media better than most people working in the industry. The England coach loves to create false narratives with funny and usually insulting remarks that he knows will always be published.

The former school teacher can deliver an easy headline. On occasion, he goes too far, but mostly it has the desired effect of heaping all the focus on an opponent or the referee.

This week’s pressure point is Pascal Gauzere, and how the French whistler must view the “unusual” scrummaging of Ireland tighthead Andrew Porter.

Sometimes this works, sometimes it backfires.

“It wasn’t my finest moment,” said Jones of a 2016 comment that brought Johnny Sexton’s parents into a narrative about the player’s “whiplash”.

“I’d lost my temper and control of the story,” he admitted. “I was cranky with myself because I knew that effectively managing my daily communication would be a critical factor in our future success.”

Usually, Jones retains complete control of whatever radical perspective he has concocted. He is ready for the question, and assumes the words will be overshadowed by winning rugby.

Last February, following the 24-12 victory at Twickenham, the 60-year-old happily dragged Ireland over the coals: “We read conditions well, read the referee well and at half-time if it was a cricket game we could have declared . . . We were just fitter.”

Thursday’s sitting at The Lensbury Hotel in Teddington was no different. Jones came with a plan to influence two critical areas of Saturday’s contest: the breakdown (“Ireland are the best poaching team in Europe”) and Gauzere’s alleged inability to see what Porter will be doing.

Everyone knows that nine months ago CJ Stander, Peter O’Mahony and Josh van der Flier were bettered over the ball by Sam Underhill, Tom Curry and Maro Itoje. It sounded like the spiky Australian was motivating his own backrow.

But Jones saved the heaviest criticism for Gauzere, with a comment that would not be tolerated by a properly run tournament: “We got a referee on the weekend who generally doesn’t reward the dominant scrum. We’ll need to be adaptable to his calls in that area. It is no use scrummaging if you cannot get a result out of it.”

He added: “[Porter] scrums in a fairly unusual way which may need some refereeing intervention.”

For good measure Jones described Ireland as the “United Nations” due to the three South African born, three New Zealanders, an Australian and Englishman in the match day 23.

Insulting, disrespectful even, but the many participants on the Zoom call were giggling. That, also, is the stock excuse whenever he goes too far.

The build-up to Twickenham would be poorer, and extremely boring, without Jones whispering sweet nothings into microphones.

Eddie Jones through the years  - The lost art of diplomacy

“Sexton is an interesting one, they’ve talked about him having whiplash injury which is not a great thing to talk about. I’m sure his mother and father would be worried about that. Hopefully, the lad’s all right on Saturday to play.” – Jones apologised for this 2016 comment.

“We’ve played 23 Tests and we’ve only lost one Test to the scummy Irish. I’m still dirty about that game but we’ll get that back, don’t worry.” – Jones apologised after saying this at a corporate function.

“I just went through immigration and I got shunted through the area where everything got checked. That’s what I’m expecting, mate. Everything that’s done around the game is going to be co-ordinated. All co-ordinated to help Australia win.” – On England touring Australia in 2016.

“New Zealand talk about walking towards pressure – well, this week the pressure is going to be chasing them down the street. The busiest bloke in Tokyo this week will be Gilbert Enoka, their mental skills coach.”
– Eddie before the World Cup 2019 semi-final.

“We read conditions well, read the referee well and at half-time if it was a cricket game, we could have declared.” – After beating Ireland, February 2020.

“Throw away line, mate. I probably need to apologise again. Sorry, sorry, sorry. I know you are not allowed say anything that is a little bit different here. So I apologise. I apologise for making a comment that is not in the rugby sense. Apologies.” – Eddie, again, after that Ireland game.

1 Ireland 23 Georgia 10: How the Irish players rated
2 Ireland’s autumn of discontent continues with abysmal Georgia showing
3 No fireworks but Limerick get the job done against Galway
4 Ireland grind their way to grisly win over Georgia
5 Jim McGuinness: There is a way to save championship and make it competitive
Real news has value SUBSCRIBE