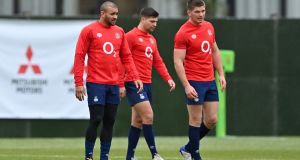 Kick-off: 3pm, Saturday. Venue: Twickenham. How to follow: The Irish Times liveblog will begin at 2.30pm. On TV: Live on RTÉ 1 and Channel 4.

Jonathan Joseph has recovered from a back injury to take his place on the wing in England’s starting XV against Ireland on Saturday with George Ford deemed fit enough for a place among the replacements.

Eddie Jones has made four changes to his side, all in the pack, with Tom Curry and Sam Underhill returning as the flankers while Mako Vunipola and Kyle Sinckler come back in to reinforce the front row.

Joseph was forced off just before half-time against Georgia but has recovered to take his place on the wing in an unchanged backline. Joseph impressed in a roaming role from the wing before injury struck and he again takes up the unfamiliar position, having also been selected there against Ireland during the Six Nations.

Ford has missed England’s two wins against Georgia and Italy with an Achilles injury and though he declared himself fit and ready to face Ireland on Saturday, he has been given a bench role with the captain Owen Farrell continuing at outhalf.

Ollie Lawrence wins his third cap and makes just his second start at outside-centre with Henry Slade continuing in the No 12 jersey. Elliot Daly stays at fullback with Jonny May on the wing.

With Curry and Underhill returning to reprise a backrow trio with Billy Vunipola – a combination that worked so well during the World Cup – Maro Itoje moves from blindside flanker to second row. Joe Launchbury keeps his place alongside him with Jonny Hill coming back into the squad on the bench. Jamie George is again selected at hooker. On the bench Max Malins is in line for a second cap with Dan Robson, Ben Earl, Will Stuart, Tom Dunn and Ellis Genge also among the replacements.

Victory for England would put them in pole position to reach the Autumn Nations Cup final and Jones said: “I’ve picked the strongest team possible for the most important game of our season. We have the highest respect for Ireland and their coach Andy Farrell. They’ve had good preparation with two wins and a dominant display against Wales, and we will need to be at our best on Saturday.

“We’ve trained well this week, we’re expecting a tough, physical game against Ireland and we’ve reflected that in our sessions. We’ll look to lift our performance even higher and are looking forward to a really good game of rugby.”