James Ryan captaincy was only ever a question of when, not if

All throughout his career, the Leinster lock has proven himself as a natural leader

Leinster second-row James Ryan speaks to the media ahead of captaining Ireland against England in Twickenham due to the absence of regular team skipper Johnny Sexton through injury. Video: VOTN 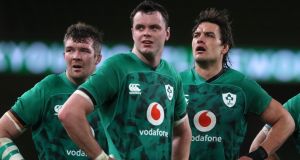 James Ryan has captained every team he has played for in his career. Photograph: Brian Lawless/AFP via Getty Images

Future Irish captain is a tag that has accompanied James Ryan ever since he broke into the team, wearily so for the young man himself, but not any longer. For like Brian O’Driscoll, it was only ever a question of when Ryan captained Ireland, not if.

Akin to the great one, Ryan made his Test debut before he played for Leinster. O’Driscoll was 20, Ryan was 21. Akin to the great one, Ryan has been handed the captaincy due to the incumbent leader, Johnny Sexton, suffering an injury. Whereas Ryan is now 24, O’Driscoll was 23 when he assumed the role due to Keith Wood being sidelined for the first of the 2002 autumnal internationals against Australia, which Ireland won 18-9, in his 34th Test.

O’Driscoll retained the role for the 2003 Six Nations before Wood returned for the World Cup, and then assumed the captaincy permanently after Wood retired.

Ryan will be playing in his 30th Test when he leads Ireland out against England at Twickenham this Saturday and however temporarily he may have the role, there’s also little doubt he will inherit the job permanently one day.

If anything, as a lock, Ryan seems even more suited for the role than O’Driscoll. Think of Martin Johnson, Paul O’Connell, Alun Wyn Jones etc . . . But more than that, Ireland is the only team he’s played in which he has yet to captain.

Natural born leader and all that.

By all accounts he led by deed more than word of mouth. One of his team-mates on that Irish Under-20s team, Hugo Keenan, last week recalled a standout moment from their opening game of the 2016 Junior World Championship when they trailed Wales by 17-0 at the end of the first quarter.

“The big moment of that game, I remember it well, James Ryan was playing and he went to [outhalf] Bill Johnston and was like, ‘stick the restart on [Welsh number eight] Harrison Keddie’. James tore after it, hit him man and ball, got a knock-on and I think we scored a couple of phases later. That was one moment that really stood out for me in that game and then I think we got on the front foot then.”

Ryan is actually a little out of practice by his standards, for when he took over the captaincy after Sexton went off in the 28th minute against Wales last Friday, it was the first time since his Irish Under-20s days. Like O’Driscoll, he leads Ireland for the first time without yet having captained Leinster.

Ryan has, by his own admission, come out of his shell in recent years, helped by Stuart Lancaster and Andy Farrell encouraging their players to express their personalities and opinions.

A tad uncomfortable when presented to the media yesterday, Saturday will be a proud day for him and his family, mum Clare and dad Mark, a former flanker with Lansdowne, sister Kate, twin brother Mark and younger brother David, even if he won’t be able to celebrate with them in person until the squad comes out of its bubble post the Autumn Nations Cup.

Intense about his rugby though he may be, he’s well liked in the dressingroom. He has a lugubrious, dry sense of humour and at Leinster is in charge of the music, in which he has varied tastes, along with Cian Healy, and recently used lockdown to progress his studies in history and politics at UCD.

The Australian cricket team’s general philosophy toward captaincy was simply to anoint the team’s best player, and Ryan is able to lead by deed due to the sustained high quality of his work, so much so that it was actually a shock to see him drop the ball last Friday. But in due course one imagines he’ll be well able to put the fear of God into his team-mates as well.

He cites O’Connell, by reputation, and Sexton, from experience, as two role models.

“Johnny just demands that we bring unbelievable standards. He always brings unbelievable standards himself. He leads by his actions every week, he’s so consistent and he has such a competitive drive, it’s infectious. Whatever leadership style you want to call that but it’s very much everyone following him. I don’t really know as much about Paul O’Connell but I’m sure he was similar.”

On Saturday, Ryan will also become the first product off the remarkable St Michael’s conveyor belt (they recently supplied a record nine of Leinster’s match-day squad) to captain Ireland.

Although two years above him at school, Ross Byrne speaks for all when saying: “I played with James when he was 16 and even back then you could see the leader he was, and not the talking he does, but how he plays. He always leads from the front and in the last year or two he’s really developed as a leader off the pitch. Even his rugby knowledge has grown a huge amount, so no doubt he’ll do a great job.”