Three-minute montage contained some material relating to the historical relationship 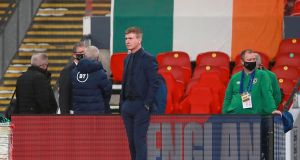 The FAI has confirmed that it is “looking into” as “a matter of urgency” reports that members of the Irish team were upset by a short video shown to them in the dressingroom before the game against England in Wembley last week as a motivational tool.

The association became aware on Thursday of reports that at least one person present when it was shown felt that it had been overly political. Senior officials are believed to have been trying to obtain a copy of the video in order to view it for themselves and ringing around some of those who saw it in London in order to establish whether there really was any adverse reaction.

In a statement issue on Thursday, the association said that it was “aware of issues surrounding content shared with our Republic of Ireland senior men’s team ahead of the recent international friendly against England at Wembley Stadium.

“The FAI is already looking into this internally as a matter of urgency, in order to establish the facts. The FAI has no further comment to make at this time.”

The Daily Mail, which broke the story online, claimed “numerous” sources had told it that “members of the Irish squad were left shocked by the political nature of the video”. “One source,” it said, “described the video as ‘close to the line’. Others, however, have described the video as more aligned with ‘pro Ireland’ beliefs than ‘anti-English’ sentiment and merely an attempt to reinforce the team’s heritage.”

Sources within the FAI seemed generally taken aback by the story but acknowledged that it would have to be looked into and any genuine issues raised dealt with.

Reports that the matter had been discussed at board level or that manager Stephen Kenny was to be required to attend a board meeting on Thursday evening to provide an explanation were denied by directors, who said that there had been no board meeting or any formal discussion at that level regarding the matter. Senior executives are, however, expected to discuss the matter with the senior team manager.

One also emphatically denied the notion that a controversy like this might be exploited given the run of poor results that the team has endured since the summer.

There was, he insisted, a widespread recognition among the association’s directors that Kenny had taken over the job at an exceptional time and had to cope with the loss of more than a dozen senior players for his most recent games in charge.

There was also, however, an acceptance that the fact that the story had been leaked from the dressingroom was not good for a manager who would expect loyalty from everyone inside it. Kenny changed many of the backroom staff upon taking over and they would, quite possibly, have to depart with him too. The players are, of course, another matter although it is understood that none raised any issues at the time.

1 Keith Duggan: Through the glories and the disgraces, we were all Maradona addicts
2 Diego Maradona dies of heart attack, aged 60
3 Handful of God: Five magic Maradona moments
4 Kevin McStay: Maybe a knockout All-Ireland Championship is the long-term solution?
5 Andy Farrell to delve deeper into Irish squad for team to play Georgia
Real news has value SUBSCRIBE
Crossword Get access to over 6,000 interactive crosswords