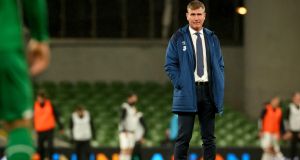 Ireland manager Stephen Kenny ahead of the Nations League game against Bulgaria at the Aviva Stadium. Photograph: James Crombie/Inpho

It was well worn ground by the time he addressed the media 40 minutes or so after the end of Ireland’s game against Bulgaria on Wednesday night but Stephen Kenny found himself addressing once again the remarkable context in which he and his players had had to complete their Nations League campaign.

The reality is that in such extremely extenuating circumstances, it is impossible to conclude too much about how the new manager has done. But he will be well aware that if he is still explaining at the end of the World Cup campaign then next year then he will probably have lost.

There were, as has been repeatedly pointed out, some positive signs in the performances over the past three months but few would be quite as encouraged as he suggests he has been.

Clearly, the goal tally is deflating whatever the circumstances and not to register a shot on target against a badly depleted Bulgarian side this week was a disappointment, regardless of the back story.

Overall, Ireland had as many attempts on goal per game, on and off the mark, over the course of this campaign as they had in last year’s under Mick McCarthy, although the statistic comes with the obvious qualifier that the nature of the competitions is very different. Take Gibraltar out of the equation for 2019 and the World Cup qualifying numbers come way down, but then Kenny has not had to contend with two teams in this Nations League of the quality of Switzerland and Denmark. With so many variables the comparison is difficult.

More stark, obviously, is the almost complete lack of actual goals and the fact that bar Slovakia away, when there was a relatively strong group to choose from and the team played quite well, it is hard to think of any opposition goalkeepers having had to work very hard to keep the Irish at bay. Unfortunately for Kenny there is a limited amount that he can do to get his players to convert the chances the team has managed to create.

Defensively things have been a bit brighter with Dara O’Shea’s performances especially encouraging but Shane Duffy’s form remains a huge concern as the players head back to their clubs for the winter. He has looked desperate to restore other people’s confidence in him but his own looks completely drained. On Wednesday, he looked lost a couple of times in the opposition area and almost gave away a goal close to his own with a poorly thought out pass that had been intended for Conor Hourihane.

A great deal will inevitably depend on the draw but against the couple of weaker teams with everyone back, it is easy enough to see things beginning to click and this side winning World Cup games fairly impressively. What is far harder to imagine right now is Ireland seriously troubling any of the top seeds or even, for that matter, the better teams from the second tier of nations.

Again, it is hard to read too much into the England game given the circumstances, but the gulf between the two sides was still alarming. Neither Ireland’s pressing or passing game was anywhere close to what was required against opponents of that quality and the feeling persists that Kenny would have been better off with a game against weaker opponents or a few extra days on the training ground. As it was, he insists, the options were very limited due to the pandemic and the association presumably had an eye on a return game somewhere down the line.

Aside from O’Shea, a couple of the other players the Dubliner promoted up from the under-21s coped well with the challenge and Kenny was right when he said after the Bulgaria game that the likes of Jayson Molumby and Jason Knight will benefit from the experience and so broaden his selection options in the new year.

Right across the group, though, the manager, like so many of his predecessors, finds himself having to hope that players he is heavily reliant upon get first-team football at clubs where they are far less central figures. Kenny could do with the likes of Aaron Connolly, Callum Robinson and James McCarthy playing regularly in the top flight but no matter how much he talks up their abilities, he has absolutely no control over the situation.

As for the players who have been marginal to the Irish set-up but who were handed opportunities because of so many ahead of them in the pecking order were absent, it has been a more mixed bag than Kenny would have us believe, with some of the performances tending to reinforce the impression that his pool of talent is really no deeper now than in the recent past.

That may change over the coming years if the success rate among the crop he is aiming to integrate is high but there are no guarantees and a few of the players who have had ‘next big thing’ status thrust upon them around the Ireland set-up in recent years have only served to highlight how run of the mill by international standards quite a few of the group generally are.

Ultimately, we will only get to judge Kenny on the World Cup campaign and qualifying would be a remarkable achievement with only group winners sure to progress. A very substantial improvement on recent months and the basis for a serious crack at the next European Championships might be more realistic.

There has been little in the chaos of the past few months, in any case, to persuade those who believed in him in the first place that their faith in Kenny has been misplaced but then he will not have won too many over either.

Capped for the first time at senior level by Mick McCarthy last year, Connolly’s status has nevertheless been raised under the new manager. His performances have sort of embodied the wider problems with the team: lots of promising approach play but a lack of ruthlessness around the area and some poor decision making. Has enormous talent, though, and if he can quickly recover some the momentum he has lost at Brighton where he has also struggled to score, he should be absolutely central to the World Cup campaign.

Stephen Kenny has shown enormous faith in the young striker whose goalscoring record as an underage international was absolutely outstanding. Technically, the 19-year-old is excellent but more experienced centre backs have coped rather easily with him. He needs to be stronger and a little cuter, but both will come with time.

The four starts he got leave little room for doubt as to how highly Kenny rates him. Did really well in a couple of them although the slightly carefree way he gets stuck in at times resulted in the second yellow that ruled him out of the Bulgaria game. After a terrific season with Millwall, is slightly out in the cold so far back at Brighton and could clearly do with more game time.

The Liverpool goalkeeper didn’t get a look in as Darren Randolph played every minute over the three windows but Ireland’s number one is 33 and currently not playing much for his club and somebody could do with staking a clear claim to being his successor . Kelleher acknowledges that he needs to play to progress on all fronts and the hope will be that the sort of loan move to the Netherlands that fell through in the summer, might re-materialise in January.

The Derby midfielder made a shaky start to the Bulgaria game but grew into things, showing his versatility in a few different positions as he was moved about to accommodate others. The teenager is generally good with the ball and tenacious when trying to win it back. Playing very regularly at Derby, he should only get better.

Probably the outstanding success story of the eight games from Kenny’s perspective, O’Shea doesn’t look the finished article and there have been mistakes but he does a lot of things well and what manager wouldn’t want a defender who seems equally comfortable in any position across the back four. Already racking up the Premier League minutes, the 21-year-old Dubliner looks to have a very bright future.

The manager has done little to dampen expectations regarding the striker who was capped by McCarthy despite the then manager clearly believing that everybody was getting way ahead of themselves with regard to a young striker who has still only played five minutes of senior club football. He looked good again for the under-21s when he came on last weekend despite a recent injury and if he can stay fit then there should be opportunities to shine at Millwall between now and March.

Connacht’s game against Ospreys the latest Pro 14 fixture to be postponed 16:31
Paul Kerrigan calls it a day after 13 years with the Cork footballers 14:39
Diego Maradona buried as world mourns flawed soccer great 09:17
Neil Lennon insists he is the man to turn it around for Celtic 08:58
Billy Burns named at 10 to face Georgia; Errors cost Dundalk against Rapid Vienna 08:00