Suzann Pettersen brings the dreaded ‘C’ word back up 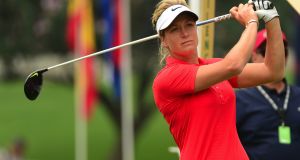 So, the “C” word – cheating – is with us again, even if Suzann Pettersen has claimed some form of “fake news” in how her story about Donald Trump gathered legs.

Pettersen isn’t the first, and most likely won’t be the last, to suggest some looseness with the rules on the part of the world’s biggest powerbroker. The actor Samuel L Jackson, rocker Alice Cooper and boxer Oscar De La Hoya have in the past issued similar tales following rounds with the Don.

For the record, let’s point out that Petterrsen (using her Facebook page) retracted/amended her remarks, claiming it is “not true at all” that Trump cheats and that the insinuation “has been taken WAY out of context.” She further explained of the original interview with a Norwegian publication, “With a big smile on my face what I was said as that he most likely paid his caddy well because every time he found his ball it was in the fairway.”

So, she meant it was a (sort of) joke. Which is fair enough, I suppose. Except there is nothing funny about cheating.

Cheating is the big no-no in golf. Unfortunately, it happens; from social rounds to the biggest stage in the world.

It was only last year that Phil Mickelson remarked, “I know a number of guys on tour that are loose with how they mark the ball and have not been called on it. I mean, they will move the ball two, three inches in front of their mark, and this is an intentional way to get it out of any type of impression and so forth and I think that kind of stuff needs to stop.”

Now, when I read those comments from Mickelson, I wondered why he hadn’t called out the players in question . . . . because, if we’re honest, that’s what should happen.

Most of us at some stage have come across incidents. Sometimes you wonder if it has actually happened. Did he just kick the ball? Other times, there can be no doubt in your mind. Sometimes, it is blatant.

I remember once playing a round of golf with someone who had no qualms about grounding his club behind the ball in a bunker. When I told him he was breaking the rules, and that what he’d done was a two-stroke penalty, his reaction was to play the rest of round in silence.

Anyway, a looseness with the rules is not to be tolerated; and the onus is on players to understand those rules, and also not to abide any cheating, be it through ignorance or plainly intentional. Call out someone if you see it! You’re doing yourself, and the other person, a favour. They might not view it that way at the time, but you are.

Golf – for the most part – is a game which teaches honesty and integrity, a sport which is based on equity. There is no place for cheating.