Meanwhile, Jazz Janewattananond is going to the Open and Jon Rahm takes on Superman 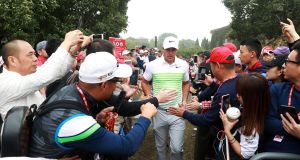 Brooks Kopeka will most likely not appear again until the US Masters in April. Photo: Getty Images

It looks like Ricky Elliott – the Northern Irishman who was acclaimed as “caddie of the year” in a vote cast by his peers in 2017 – will have some unwanted downtime after his employer, US Open champion Brooks Koepka, got some bad news about the wrist injury that has troubled him of late.

Koepka had complained of soreness to his left wrist towards the end of last season, although medical checkups and x-rays and scans failed to detect anything untoward. However, further investigation has determined that the American had suffered a partial tear to his ECU tendon which will sideline him for up to 10 weeks.

In fact, based on medical estimates, Koepka’s return is like to come at the US Masters at Augusta.

In a statement confirming the injury, Koepka said: “I am frustrated that I will now not be able to play my intended schedule. But I am confident in my doctors and in the treatment they have prescribed and I look forward to teeing it up at the Masters.”

Koepka’s only appearance so far this year came in the Sentry Tournament of Champions in Hawaii, where he battled through the pain. “It feels like someone is jabbing a knife in my hand,” he remarked at the time, where his distant last place finish prompted him to pursue further medical opinion and which resulted in the diagnosis.

The upshot of Koepka’s injury is that he has had to rip up a planned schedule that included the Phoenix Open and Pebble Beach pro-am as well as two WGCs, the Mexico Championship and the Dell Match Play.

All going well and baring any further setbacks, Elliott and Koepka hope to be reunited at the Masters.

The wonderfully named Jazz Janewattananond is familiar with Carnoustie, having visited the links during the 2007 British Open there when Pádraig Harrington won his breakthrough Major championship.

There’ll be a major difference when the young Thai golfer returns there this coming July: back, then Jazz was a mere slip of a lad – of 10 years of age – who was brought along by his father to watch Tiger Woods. He’d been in Scotland to represent Thailand in the Junior Open.

However, when he returns there this summer, it will be as a player himself in the British Open after he secured one of the four available exemptions on offer at last weekend’s Singapore Open. Jazz finished in a share of fourth-place behind Sergio Garcia which was enough to earn one of the coveted tickets to Carnoustie.

“I am very excited about teeing it up at Carnoustie, but also very nervous about playing in it even though it is still a few months away. It is a dream come true to be playing The Open. I can’t wait to be there.”

The 2017 season was a mixed year for Jazz as he started the year without an Asian Tour card. But he turned his career around with a victory at the Bangladesh Open last February and his career has been on the upswing since. He made his debut on the PGA Tour last May and also earned his European Tour card for the 2017/2018 season through the Qualifying School.

Paula Grant – the Irish women’s close champion – has certainly hit the ground running in the new season and will hope to carry the momentum of last week’s bronze medal finish in the South American Amateur championship in Argentina with her to this week’s Portugese International.

Grant is part a four-strong Irish representation at West Cliffs in Portugal, where she is joined by Annabel Wilson, Valerie Clancy and Jessica Ross for the 72-hole strokeplay event.

“It’s a weird feeling coming to defend a trophy because it’s yours and you don’t want to give it away” – Tommy Fleetwood on successfully defending his title in Abu Dhabi.

“So far I’ve only lost against Superman this year” – Jon Rahm, after outdueling Andrew Landry in a four-hole sudden-death play-off to take the Career Builders championship at La Quinta. Rahm finished last season with a win in the DP World Tour Championship on the European Tour, then started the year with a runner-up finish behind Dustin Johnson – aka Superman – in the Sentry Tournmanent of Champions earlier this month. It means the Spaniard has gone 1st-2nd-1st in his last three appearances worldwide in moving up to world number two.

4 & 3: There are four Irish players – Rory McIlroy, Paul Dunne, Darren Clarke and Graeme McDowell – in the field for the Omega Dubai Desert Classic on the PGA European Tour. There are three Irish players – Shane Lowry, Pádraig Harrington and Séamus Power – competing in the Farmers Insurance Open on the PGA Tour.

“Couldn’t ask for a better start of the year than winning the #SingOpen2018 with the new @CallawayGolf equipment!! Excited for what comes next!” – Sergio Garcia after his runaway win in the Singapore Open, where he finished five strokes clear to runners-up Shaun Norris and Satoshi Kodaira.

“Battled on every shot but just couldn’t get anything going in the wind. Game is improving every day just need to put it all together. #battleon” – Paul Dunne moving on to Dubai after a disappointing closing round in Abu Dhabi.

“Watching Andrew Landry and Jon Rahm in playoff. Walking off tee talking to each other. Are you kidding me ? Talking at all. ?” – Two-time US Open champion Curtis Strange – not impressed at all – is old school when it comes to interaction on the golf course!

Q: During play of the 1st hole, a player plays his tee shot while wearing a non-conforming glove and continues to wear the glove until after making his second stroke. He is then informed that wearing such a glove is a breach of Rule 14-3. What is the penalty?

A: Despite the wearing of the glove being continuous, each stroke is an intervening event in defining a breach and therefore the player is disqualified for breaching Rule 14-3 more than once during a stipulated round. If the player had stopped wearing the glove before making the second stroke, there would only have been one breach and the penalty would be loss of hole in match play or two strokes in stroke play.