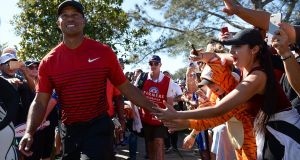 Tiger Woods with a fan on the final day of the Farmers Insurance Open. Photograph: Donald Miralle/Getty

On a day when the warm Santa Ana winds were gusting and swirling at Torrey Pines, Tiger Woods made a move up the leaderboard during the final round of the Farmers Insurance Open, as he had often done on the way to winning eight PGA Tour titles here.

This surge, however, was unexpected. Woods, 42, had arrived here with a ranking of No 647 in the world and “tempered expectations.” He admitted he did not know what to expect for his first PGA Tour start in a year and, more significantly, his first tour event since undergoing spinal fusion surgery in April.

So when he made the 36-hole cut, requiring a birdie on his last hole on Friday to reach a tournament’s weekend for the first time since 2015, his comeback already was considered a success.

And when he overcame wildly erratic driving and posted a two-under 70 on Saturday, moving up to 39th place, it was another step in the right direction.

Finally, on Sunday, playing in front of the largest moving galleries, as he did all tournament, he revved up his fans by making four birdies in the first 11 holes despite facing the most challenging conditions of the week. He climbed as high as 18th on the leaderboard before making two bogeys down the stretch and winding up with an even-par 72.

Woods finished the tournament with a three-under 285, putting him in a tie for 23rd, seven shots behind Jason Day, Alex Noren and Ryan Palmer, who tied at 10 under and went to a play-off. Palmer was eliminated on the first extra hole. Day and Noren played the first five playoff holes without a winner before play was suspended for darkness. They are set to resume at 11am (7pm Irish time) on Monday.

“Overall, I’m very pleased,” Woods said on Sunday. “After not playing for a couple of years and coming out here on tour, you know, it was a solid four days. I had to fight for every score on every hole, and sometimes those are more pleasing than boring rounds. I can grind it out with the best of them.”

His statistics gave evidence of how hard he had worked to play at or under par. On Sunday, he hit only three of 14 fairways for the third consecutive round, and he finished tied for last in driving accuracy among the 77 players who made the cut. He compensated for wayward driving with excellent chipping, putting and bunker play, making par or better on 19 holes on which he failed to reach the green at least two strokes before par.

“The short game wasn’t something I was worried about coming in this week,” he said. “I need to work on my driving. These are some of the narrowest fairways on the whole tour, so when I don’t have my best stuff, and now it’s windy, it just compounded it. It made it very difficult for me.”

Woods said he could take many positives from his first tour event since last year’s Farmers, where he missed the cut. Roughly half of the 156-player field missed the cut this year, including Rickie Fowler, ranked No. 7 in the world, and the 2017 Tour Championship winner Xander Schauffele, ranked 26th.

On Sunday, Woods finished ahead of world number two Jon Rahm, the defending champion who shot 75-77 on the weekend; No. 22 Francesco Molinari, No. 36 Patrick Cantlay and No. 46 Phil Mickelson, among others.

Next on Woods’s schedule is the Genesis Open at Riviera Country Club in Los Angeles starting February 15th, a tour event that benefits Woods’s foundation. He said after Sunday’s round that he was totally pain-free and would go home to “reassess where I’m at” and how he feels physically, coming off a full tournament, before announcing his schedule.

“I’m trying to build toward April,” he said. “I’m looking forward to playing a full schedule and getting ready for the Masters, and I haven’t done that in a very long time.”