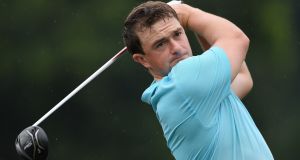 Paul Dunne: “I didn’t play as well as I would have hoped, but I would rather get no points and a team win than win all matches and the team lose.”

Paul Dunne’s globetrotting for 2018 is already well and truly under way, as part of Europe’s winning team in the EurAsia Cup, but it will be interesting to see if the Greystones man will top the air miles he clocked up last season.

The golfer’s brother David, a performance nutritionist who includes Harlequins Rugby, boxer Michael Conlon and, of course Paul, among his clients, recently posted a graph of the amount of time Paul spent either in airports or aboard a plane during his 2017 season . . . and it amounted to a mind-blowing 16 days of his life.

Dunne’s golfing travels saw him spend 377 hours and 55 minutes in a plane or in an airport, broken down as follows: 84 hours pre-flight, 245 hours 30 minutes flying, and 48 hours 20 minutes in layovers.

With one trip to Malaysia already clocked in so far this season, he’s off and running again . . . even if, unfortunately for him, he was zero for three in his matches in the EurAsia Cup.

“I didn’t play as well as I would have hoped, but I would rather get no points and a team win than win all matches and the team lose,” said Dunne of his first professional team experience. He was the only European player who didn’t manage to contribute a point to the cause, although no fewer than four players on the Asian team - Ben An, Kiradech Aphibarnrat, SSP Chowrasia and Anirban Lahiri - were also pointless.

The experience of bonding etc . . . that Dunne will have picked up from being part of the team in Malaysia will surely stand him in good stead, especially if he makes it to the Ryder Cup in Paris come September. As of now, he is currently in one of the eight automatic positions - four off the order of merit, four off the world points list - and, if we’re honest, that’s the route he will need to make Thomas Bjorn’s team against the USA with “wild card” picks more likely to go to seasoned campaigners.

For Bjorn, the experience in Malaysia must have been like walking through a muddy field - trailing after day one and again after day two - only to find smoother ground when it matter most, dominating the day three singles to coast home with the objective achieved long before the final matches came home.

A defeat wouldn’t have done any good for any European captain, such was the top-heavy nature of the world rankings in favour of the visiting team. All was well that ended well however for Bjorn, who can expect as many as half a dozen of those who played in the EurAsia Cup to also figure in the Ryder Cup.

Still no sign - yet - of a return of the Irish Ladies Open to the Ladies European Tour calendar, but further signs of green shoots on that circuit (which is very much in the shadow of the LPGA Tour) has come with the news that the Investec South African Open has been added to this season’s LET schedule.

Ever wondered how much a @EuropeanTour golfer travels? ✈️ Check out @dunners11 travel for competition in 2017⛳️ Roll on 2018! 🇮🇪 ☘️ pic.twitter.com/PfMYrnFpBa

The LET gets up and running again next month with an Australian swing that comprises the Vic Open, the Canberra Classic, the Australian Ladies’ Classic and the New South Wales Open before heading to Cape Town for the South African Open at Atlantic Beach from March 8th-10th.

The tournament marks the LET’s return to South Africa for the first time since 2014.

Mark Lichtenhein, the chairman of the LET, was understandably “delighted” at the addition of the tournament to the schedule, pointing out it provides “at least five playing opportunities within a six-week period early in 2018.”

$12.9 million
That’d be the price tag on the McIlroys’ home in Florida, which is up for sale. Rory McIlroy and wife Erica - who recently purchased Ernie Els’ old house - have put their property in Palm Beach Gardens on the market: McIlroy originally paid $9.5 million for the six-bedroom nine-bathroom house, in 2013. The new McIlroy abode is in the upmarket Bears Club, where Jack Nicklaus will be among the new neighbours.

“She never put a foot wrong. It’s the first time she has ever caddied and I just can’t thank her enough”
Chris Paisley’s breakthrough win on tour came with the help of his wife, Keri, who took on the role of caddie after the player’s regular bagman took a (badly timed) holiday!

“She is obviously going to be on the radar for the Solheim Cup at Gleneagles (in 2019) if she continues the sort of form that has enabled her to become world number one . . . and, quite often, they make the transition, these days, fairly quickly into the pro ranks”
Europe’s Solheim Cup captain Catriona Matthew has her eyes on Leona Maguire, who is set to turn pro this summer.

“One of the TOUR’s all-time good guys, @jarrodlylepga, underwent a third bone marrow transplant. Donations during January for Jarrod will help the family”
Graeme McDowell highlighting the plight of Australian player Jarrod Lyle, who is battling acute myeloid leukaemia. Lyle initially contracted the disease as a 17-year-old, relapsed in March 2012, necessitating a second transplant, before suffering a recurrence last July. The PGA Tour has designated “January for Jarrod” as part of its fundraising effort for the player and his family.

“Awesome display of golf @ChrisPaisley86. Congrats and always a good one to win”
Andy Sullivan - part of the winning team in the EurAsia Cup - tips his cap to his fellow-Englishman after Paisley’s win in the South African Open, a tournament Sullivan won in 2015.

“Between the Napa wildfire evacuation, hurricane evacuation, and today a ballistic missile threat (mistake). I’m glad to be alive and well. #perspective”
Patton Kizzire reacting to the missile threat that wasn't in Hawaii on Saturday. Kizzire put his own perspective on matters by defeating James Hahn in a play-off to win the Sony Open, his second tour win of the PGA Tour season, which put him top of the FedEx Cup standings.

Q. In match play, A’s ball was resting against the flagstick but it was not holed. A, believing he had holed out, lifted his ball without first marking its position. In doing so, A incurred a penalty stroke under Rule 20-1. Since A was not aware that he had incurred a penalty, he did not inform B. B, who had not witnessed A’s actions, played his next stroke. A’s actions were then brought to the attention of B and he picked up his ball, claiming that A’s lifting of his ball entailed a penalty of loss of hole. A and B agreed to continue the match and refer B’s claim to the Committee later. How should the Committee have ruled?

A. The Committee should have ruled that B won the hole. B’s claim was valid since he notified his opponent that he was making a claim or wanted a ruling (A and B agreed to refer B’s claim to the Committee), of the facts that gave rise to the claim (A’s lifting of the ball). Although the penalty for A’s lifting of the ball without first marking its position is one stroke, he lost the hole for giving wrong information (Rule 9-2b) when he failed to inform B before he (B) played his next stroke that he (A) had incurred the penalty stroke.