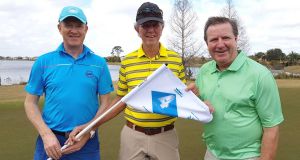 Wardle, 18, heads to UCLA in September and will be joined there in 2019 by Wilson and both have their sights set on a career in professional golf.

Lisburn’s Paula Grant, who was third in the recent South American Amateur Championship in Argentina, finished a creditable 14th on 317 after rounds of 75, 81, 80 and 81.

Jimmy Bolger battled back from a horror start to qualify for this week’s final stage of the Staysure Tour’s Qualifying School in Portugal. The Kilkenny professional will be the only Irish player in the 76-strong field hoping to win one of just five cards over 72 holes at Pestana Golf Resort.

After dropping seven shots in his first 10 holes at Gramacho Golf Club, Bolger birdied the par-five second (his 11th) and the par-three seventh to add a 77 to his first round 73 and finish tied 10th on six-over 150.

That was good enough to make it with two shots to spare as Argentina’s Mauricio Molina shot 70-72 to top the 22 qualifiers on two-under 142.

At Silves Golf Course, Christy O’Connor was 62nd after rounds of 80 and 81 where amateur John Kemp shot two 68s to win the qualifier on four-under 136.

Baltinglass’ Joseph Byrne made it a hat-trick of successes in the TaylorMade Winter Series when he shot a four-over 75 to take the top gross prize at Portmarnock Hotel & Golf Links.

Just three weeks after following a win on his 15th birthday with a runner-up finish in the nett to his brother William, the reigning Leinster Under-14 champion picked up yet another prize.

Playing off plus three, he had two birdies and six bogeys on his card, going out in an impressive one-under-par as he topped the 68-strong field.

He edged out two professionals for the top gross prize too as Carr Golf Spawell’s Ross Young shot 76 and Naas’ Conor O’Rourke a 77 with Kevin Le Blanc losing out on a prize on countback.

Irish Golf Links on course for US success

The PGA Show is the biggest industry golf show in the world attracting more than 40,000 visitors with over 1,000 media from 25 countries and this year’s event saw the North & West Coast Links fly the flag for a number of Irish golf courses and hotels, including Ballyliffin Golf Club, host venue for this year’s Dubai Duty Free Irish Open.

To tee the week off in style, the company organised an Irish Golf Day prior to the show on behalf of the Irish Golf Trade and in association with main sponsor Tourism Ireland, with over 100 golf tour operators, golf media, group leaders and Irish golf trade representatives signed up to take part at The Golden Bear Club at Keene’s Point, Orlando.

As a key part of the Tourism Ireland stand, this is the 29th year in succession that North & West Coast Links has attended the show, promoting a range of golf tour packages to member courses including Royal Portrush, host venue for The British Open in 2019, Ballyliffin, Carne, Enniscrone, Donegal, Narin & Portnoo, Rosapenna, Castlerock, Portstewart, Ardglass, Galway Bay, Westport and Portsalon.

As Lynn Kenny she was Stirling and Clackmannan women’s county champion four times between 1998 and 2004, and she won the Scottish women’s amateur championship at Machrihanish in 2000.

She played for Scotland in the women’s home internationals every season from 2000 to 2004 inclusive before turning pro. Lynn, who was reinstated last year as an amateur with a plus two handicap, said: “I am more than happy. It was my first serious competition for a long time, and my first title success for something like nine years!”

She had scores of 72 and 76 for 148 - 23 strokes ahead of the runner-up and two shots lower than the winning total (150) in the men’s championship by the winner, Sultan Abdullah of Bahrain.

Brigid McCaw from Royal County Down Ladies was confirmed as President Elect of the ILGU at the Annual General Meeting of the ILGU Ltd at the Red Cow Moran Hotel last week, and will take over from Vonnie Noonan in 2019. McCaw, a past Lady Captain of Royal County Down Ladies, was Chairman of the Ladies Golf Union (LGU) in 2009 and subsequently became LGU President in 2013. She has served as a volunteer for the ILGU for a number of years as a Rules Official, on the District Executive and as a Board Director.

Clodagh Hopkins from Woodbrook was elected Chairman of the ILGU Board and has succeeded Brege McCarrick (Mullingar). Hopkins took up the position of High Performance Director on the ILGU Board in 2017. An Interprovincial golfer in her own right, she has represented her native Connacht on a number of occasions, most recently at Shannon Golf Club in 2017.

German clubs resume training amid tight virus restrictions 12:17
Report says PGA Championship is rescheduled for August 12:12
All in the Game: Capello plumps for Calamity James over Joe Hart 10:20
The Offload: Roll up for rugby’s very own horror film 09:00
Ken Early on Mick McCarthy II; racing will endure even the harshest criticisms 07:19
Here is your handy guide to sport on television this week