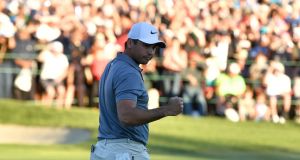 Australian Jason Day won for the first time in 20 months when he beat Alex Noren in a playoff at the Farmers Insurance Open at Torrey Pines on Monday.

Day sealed victory with a birdie at the sixth extra hole after Swede Noren found a water hazard with his second shot at the par-five 18th.

It was the 11th PGA Tour triumph for Day, who had not won since the 2016 Players Championship when he was ranked number one in the world.

Day and Noren could not be separated in five extra holes on Sunday before the playoff was suspended due to darkness.

It lasted just one more hole on the resumption on Monday morning after Noren narrowly failed to clear the pond guarding the green with his second shot.

The Swede was seeking his maiden PGA Tour victory. He has won nine times on the European Tour.