Rory McIlroy frustrated after failing to seal the deal in Dubai 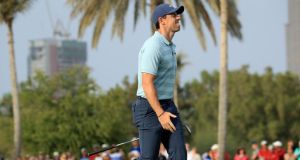 The optimist, or the pessimist? Is the glass half-full, or is it half-empty? Half-full, surely.

Rory McIlroy’s return to duty in the desert, firstly in Abu Dhabi and then in Dubai, brought more positive vibes than negative ones; and, if he expressed dismay in allowing a winning situation in the Dubai Desert Classic to slip away, there is a sense that such hurt will work in his favour moving forward.

Indeed, that McIlroy was, as he put it himself, “pissed off” at only finishing second behind Li Haotong, provided evidence that his competitiveness is as strong as ever.

Just as Tiger Woods’s philosophy focused on “Ws” – wins – through his prime, so too does McIlroy chase victories and the pain of defeat on this latest occasion was to do with a missed opportunity, especially since his last tour win came at the end of the 2016 season.

Yet, just a day later, Jason Day – on a similar winless run, indeed one even longer – showed that it is important to keep the faith, to persevere.

McIlroy talked afterwards of “bad shots” and “poor decisions” and “mental errors” in how he allowed a position of strength – of being two shots ahead with seven holes to play to evaporate before his eyes and to ultimately turn into a situation where he lost out by one shot. No wonder he was hurt. Losing hurts, and that’s how it should be for McIlroy. Hurt, but unbowed.

And, in those two tournaments he played since returning to competition, McIlroy has contended and can move forward with optimism and a degree of expectation to a busy schedule in the United States.

The Northern Irishman has just a one-week break before a schedule of three straight tournaments (Pebble Beach, Genesis Open and the Honda Classic) followed by another week off and then another three-week stint (the Valspar, the Arnold Palmer Invitational at Bay Hill and the WGC-Dell Technologies Matchplay).

Proof of McIlroy’s upward trending, even if a win has eluded him in the Gulf Swing, is that he has moved from 11th up to eighth in the official world rankings after the first two appearances of his season.

The glass however might be more half-empty than half-full for Shane Lowry, after his seasonal reappearance in the Farmers Insurance Open saw a nine stroke difference – 69 on the North, 78 on the South – in two days as he missed the cut. Lowry is the sole Irishman in the field at this week’s Waste Management Phoenix Open which at least offers the chance for immediate redemption.

Darren Clarke is the only Irish player in the field for the Maybank Championship, where is one of three Major champions – along with Danny Willett and Henrik Stenson – competing. Clarke has endured a pretty miserable time these past two seasons, having failed to make a cut on the European Tour dating back to the British Open in 2016.

Two members of Thomas Bjorn’s EurAsia Cup winning team have returned to Kuala Lumpur for the tournament, Bernd Wiesberger and Alexander Levy. Fabrizio Zanotti of Paraguay is the defending champion.