Roars return but Tiger remains far too wild on return 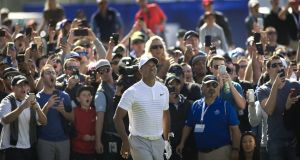 The crowd reacts as Tiger Woods plays a shot during the third round of the Farmers Insurance Open at Torrey Pines Golf Course in San Diego. Photograph: David Maung/EPA

Vintage “Tiger roars” returned Saturday to the South Course at Torrey Pines, where Tiger Woods has won nine tournament titles. It did not seem to matter to the huge galleries following Woods that he was ranked No 647 in the world or that he had begun the day near the bottom of the 77 players who survived the 36-hole cut here at the Farmers Insurance Open.

He was still the game’s biggest name, the 14-time Major winner making a comeback after a year away from the PGA Tour to deal with a deteriorating spine and recover from his latest surgery. This event is Woods’s first on tour since he missed the cut at last year’s Farmers and the first one in which he has made a cut since 2015.

Even though he wildly sprayed the ball off the tee, Woods posted a two-under-par 70 in the third round Saturday. Having improved by one shot each day, he had a total of three-under-par 213 to tie for 39th heading into Sunday’s final round, eight shots behind the leader, Alex Noren.

Woods elicited loud cheers with an assortment of impressive shots from the rough and out of bunkers, as well as several lengthy par-saving putts, all of which compensated for his wayward driving. Because he hit only three of 14 fairways and nine of 18 greens in regulation, a laughing Woods summed up his round as “gross”.

“It was a struggle out there,” he said. “I didn’t hit it worth a darn all day. I was really struggling trying to find anything that was the resemblance of a golf swing. But I was scoring. I was chipping, putting. I was grinding.”

Woods made four birdies – all after hitting his tee shots into the rough – and two bogeys: at the par-three 11th and the par-three 16th after pulling both iron shots left. Starting his round on the back nine – with a tee time that maximised his exposure on the two TV networks providing coverage – Woods hit his first six tee shots into the rough. His seventh found a greenside bunker. He did not hit his first fairway until the 17th hole. But on the strength of his short game, especially his putting, he was able to make the turn at one under par (two under total).

His erratic driving began on his first hole; he hooked a three-wood into the left rough on No 10. His second shot found the right greenside bunker, and then he blasted out to 12 feet and made the par putt that set off the day’s first roar. It was the first of nine holes in this round on which he needed only one putt.

Woods hit eight drives into the left rough and four into the right rough. He said he had tried and failed to make adjustments, attributing some of the problem to a lack of tournament competition. “It’s not the driver; it’s just my swing,” said Woods, 42, who had spinal fusion surgery in April. “My feels are different. Some of my go-to shots aren’t there. Some of my shots I like to hit under certain circumstances aren’t there, either.”

Woods’s first birdie – on the 504-yard, par-four 12th – came after a 196-yard shot from the deep right rough stopped on the green. He rolled in a 10-footer to loud cheering. He also birdied from the right rough on the par-five 13th, the par-five 18th and the 560-yard par-five sixth, where he reached the green in two shots and two-putted from 40 feet.

His par saves were equally impressive. He escaped greenside bunkers on the 14th and 15th (both par-fours), and he got up and down with sand-wedge flop shots from the rough on the third and eighth (both par-threes). Asked what his score might have been if his short game had not been sharp Saturday, Woods smiled and said his scorecard might have had a few eights. He called them “snowmen”.

“The only thing I have is my short game and my heart,” he said, “and that got me through today.”

Woods, who was born and reared in nearby Orange County, thanked the fans in Southern California for their support.

“I haven’t had people yelling like that in a while,” he said. “So many of the people I haven’t seen in a long time have come out this week, which is fantastic. I’ve played well here over the course of my career, and I think a lot of these fans just want to see some of that. And, trust me, I’m trying.”

On the flipside of Woods’s drawing power, Noren, who has won nine times on the European Tour, remains a mystery man in the United States to all but the most dedicated fans stateside.

And that is just fine with the 35-year-old Swede, who will take a one-stroke lead into the final round at Torrey Pines on Sunday.

“I don’t care too much if they [American audiences] know me or not,” he said after carding three-under-par 69 on Saturday.

“It’s quite nice if they don’t know me. All I’m trying to do is play some good golf and my aim is to win a tournament.

“I’ve been under the radar for most of my career.”

The long-hitter has a career-high world ranking of eighth, and is currently 19th.

Renowned as a dedicated worker who would often close the range, he has lightened up a bit in recent years and is reaping reward for his ‘less is more’ attitude.

He was mostly rock solid on Saturday, apart from a double-bogey at the par-four 12th, where he took four strokes to negotiate the final 55 yards.

“It’s a tough hole but a double felt pretty rough after just lipping out the hole before . . . so I’m happy coming back from that,” he said after picking up three birdies in the final six holes.

Now a member of the PGA Tour, Noren will look to maintain his slender advantage on Sunday when he tees off at 11-under 205, with 10 players within three strokes.

“I’ve dreamt of winning on the US Tour,” he said. “It’s a tough day tomorrow but I’m looking forward to it.”– New York Times and other agencies