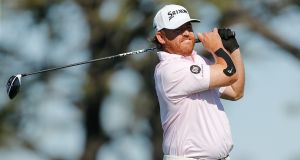 JB Holmes plays his shot from the fifth tee during the final round of the Farmers Insurance Open at Torrey Pines. Photo: Michael Reaves/Getty Images

Luke Donald – not especially noted for being a speedster himself – led the social media charges against JB Holmes’s painstakingly slow play in the Farmers Insurance Open. “Anytime today J.B.” tweeted Donald as Holmes took what seemed like an eternity to play a shot on the 18th hole of his final round.

If you were watching on TV, you were probably cringing too. If you didn’t see it, this is what happened: Holmes, needing an eagle to have a chance of getting into the playoff, deliberated for four minutes and 10 seconds with his caddie on how to play his approach shot to the Par 5 and ultimately opted to play a (terrible) lay-up.

Holmes had 230 yards from the rough to reach the green (into the wind) and would later remark, “it was between the 5-wood – I didn’t think it was going to get there – and the 3-wood would have gone over the back . . . . that pin being in the bowl, I thought I had a better chance of holing out with a wedge than I did trying to chip one in.”

Donald’s caustic comments – “....we can all blame J.B., and yes the player should take responsibility for their pace of play, but if they don’t that’s why we have Tour officials. They needed to step in a while ago” – were part of a deluge of criticism levelled at Holmes for his indecision and slow play.

Not that Holmes was accepting the blame post-round, having failed to make it into the playoff. “I was still trying to win. That’s part of it,” he said.

Thing is, Holmes has history on this very subject matter. As long ago as 2008, he is quoted in Golf magazine – in an article on slow play – explaining the issues facing players down the stretch. “A lot of old habits kick in when you’re under pressure. You’re playing for $1 million. If somebody thinks I’m slow, or taking long, I don’t care. Personally, I don’t want to take that long. I’m working on that. I would rather be slow and win than rush something, hit a bad shot and not win.”

No Irish stop for Seniors Tour

The rebranded European Seniors Tour – from now on to be known as the Staysure Tour – will have 18 tournaments and stops from Moscow to Mauritius . . . . but, unfortunately, still no Irish stopover on its itinerary.

Tour boss David McLaren is still seeking to extend playing options, “we are working diligently to add further tournaments to our calendar for 2018.”

However, the grey-haired golfing brigade will have an improved schedule – with three new events in Denmark, England and Spain – as well as the return of the PGA Seniors Championship, which, like the tour itself, will be title sponsored by Staysure.

In fact, that PGA Championship – yet to find a home, but likely to be played at an English venue – will come a week after the big one, the British Senior Open which this year will be played over the Old Course at St Andrews when Bernard Langer defends his title.

The seniors circuit starts in March with the Sharjah Golf Masters in the UAE and finishes up in December with the MCB Tour Championship in Mauritius.

1&1: Skinny pickings on tour for Irish players this week, with Darren Clarke the lone Irish player in the field for the Malaysian Open in Kuala Lumpur on the European Tour and Shane Lowry the lone standard-bearer in the Waste Management Phoenix Open on the PGA Tour.

“I wanted to win. I always want to win, and I just didn’t do enough when I needed to” – Rory McIlroy on another close call, following his third place finish in Abu Dhabi with a runner-up finish in Dubai.

“It’s actually a good start to the year. I think that the game is closer than it looks” – Phil Mickelson, who, with his brother Tim now confirmed as his full-time caddie, opened his season with a tied-45th finish at the Farmers Insurance Open.

“I thought it was a dream that I won till I woke up this morning and checked my phone. I think 171 text message is a record lol” – American Brittany Lincicome after successfully defending the Pure Silk LPGA Championship in the Bahamas, which concluded in darkness but was able to finish with the aid of floodlights.

“Can’t thank the San Diego fans enough. I scrambled my butt off but happy with my first event back. See you at Riv!” – Fit and healthy again, Tiger Woods will be back for the Genesis Open at Riviera in Los Angeles next week.

“Congratulations to @haotong_li on winning #ODDC18 yesterday.. incredible scoring and performance.. Moving inside the Top 50 is a big deal and first Chinese player to do so. Well done.” – Ian Poulter tipping his cap to Li Haotong on his win, which lifted the 22-year-old to number 32 (from 60th) in the latest world rankings.

Q: A ball had broken into pieces and had been abandoned. Part of it was lying in heavy grass. A player mistook the part for her ball in play and played a stroke with it. The player asserts that part of a ball is not a ball and, therefore, that she has not played a wrong ball. Is the player correct?

A: No. Since the player made a stroke with a wrong ball, she lost the hole in match play (Rule 15-3a) or incurred a two-stroke penalty in stroke play (Rule 15-3b).