Golf Review 2017: Generation game moves from old to the new 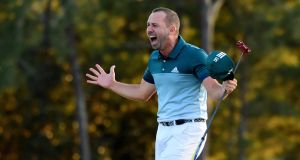 Sergio Garcia celebrates after defeating Justin Rose in a play-off at the US Masters. Photograph: Harry How/Getty Images

The scar tissue of past torments can sometimes be used as an incentive, a calming balm, as Sergio Garcia - playing in his 74th career Major - discovered in lifting the US Masters title at Augusta National back in April. Yet, as the season unfolded, the real story was not so much of an aging Spanish matador finally getting his blessed reward but of a shift in the age profile that has brought a band of twentysomethings without fear or favour to the fore.

The generation game is intriguing, to be sure: Brooks Koepka was 27 when he claimed a maiden Major at the US Open at Erin Hills in June. Jordan Spieth was 23 when he claimed a third career Major, lifting the Claret Jug at Royal Birkdale in July with a warped homeward run that combined the ridiculous with the sublime; and Justin Thomas was 24, when he showcased his talents to win the US PGA title at Quail Hollow.

And, in a season where Rory McIlroy’s rib injury proved an irksome disruptor, Paul Dunne - another who has hit the ground running in the professional game, 24 at the time of deliverance - claimed a breakthrough first career win on the PGA European Tour, his victory in the British Masters at Close House ensuring the sequence of at least one Irish winner on tour (stretching back to 1994) was maintained.

From one Major venue in 2017 to another, ranging from the old (Augusta National and Royal Birkdale) to the new (Erin Hills and Quail Hollow) the championships provided us with intrigue and compelling drama. And if Senor Garcia’s date with destiny arrived at the expense of Justin Rose in ensuring he would wear a green jacket to his wedding in the summer, it was the new band of brothers who guaranteed the golfing might of the USA was reflected in the other three Major successes.

On what would have been the 60th birthday of the late, legendary Seve Ballesteros, Garcia had hoped for an alignment of the stars in his quest to finally fulfil his destiny. It happened, but only after a journey that twisted, turned and slithered on the back nine of the hallowed turf. Typically for the matador, this was an engaging contest of swinging emotions where a three shot lead after five holes of the final round disappeared until he, reminiscent of Ballesteros, was first forced to demonstrate wizardry and then was pushed into a duel of the ages with Rose, one that was only won with a Garcia birdie on the first play-off hole.

“I think the problem is, because where my head was at sometimes, I did think about, ‘am I ever going to win one?’. I’ve had so many good chances and either I lost them or someone has done something extraordinary to beat me. So it did cross my mind. But lately, I’ve been getting some good help and I’ve been thinking a little bit different, a little bit more positive. And kind of accepting, too; that if it for whatever reason didn’t happen, my life is still going to go on. It’s not going to be a disaster,” said Garcia, speaking with the maturity of a 37-year-old too often rebuked by fate. But not this time.

For Koepka, with Ulsterman Rickie Elliot on his bag, his US Open victory at Erin Hills provided affirmation that his route to the big time - starting out on the Challenge Tour in Europe, progressing to the PGA European Tour and then the PGA Tour in the United States - may have taken a global odyssey to reach its destination, but that the learning curve was worth all the criss-crossing of time zones.

Prior to his final round, Koepka got a phone call from world number one Dustin Johnson, his predecessor as champion, reaffirming what those in his camp had also been telling him: “Just stay patient, just keep doing what you’re doing, you’re going to win the thing and don’t get ahead of yourself,” was the message from his friend and frequent practice partner. Koepka’s 67 for a 16-under-par total of 272 - for a four-stroke winning margin over Hideki Matsuyama and Brian Harman - matched the record low score to par of Rory McIlroy’s win in the 2011 US Open at Congressional.

There is an old snapshot of two young golfers in short trousers, sitting side-by-side and eating hamburgers, which resurfaced in the autumn: the photograph is of Spieth and Thomas, promising juniors at the time and who have since grown into Major champions. Spieth claimed the Claret Jug at the British Open in July, his third career Major, and Thomas made his Major breakthrough in lifting the Wanamaker Trophy.

Spieth got his hands on the silverware first, his antics on the back nine of the final round like a work of fiction; only, it was real. A wayward drive on the 13th seemed to have ruined Spieth’s quest for glory - with Matt Kuchar seemingly in the driving seat - but a well-thought-out penalty drop, which took him from heavy rough in the sand hills to a place among the manufacturers’ trucks on the driving range, saw him escape with a bogey and then produce a run of birdie-eagle-birdie-birdie-par to lay claim to the prize.

For his part, Thomas rode his luck at times; and produced magic at others. A monster birdie putt on the ninth of his final round was followed by another on the 10th, an indication of the golfing Gods bestowing favours. His tee shot, for starters, hit a tree and bounced back onto the fairway. “Get lucky, just spit it out for me, please,” Thomas had implored the ball in flight. And, when it did, he turned to his veteran caddie Jimmy Johnson and remarked, “That’s why you ask!” He then chipped in for a birdie on 13, to separate himself from the logjam atop the leaderboard en route to a breakthrough Major title.

Thomas would later scoop the $10 million jackpot for winning the FedEx Cup, while another twentysomething, England’s Tommy Fleetwood, claimed the Race to Dubai title on the PGA European Tour.