Norwegian golfer sceptical of US president’s handicap of three 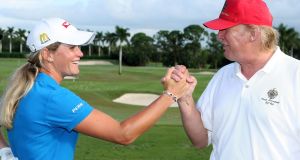 Suzann Pettersen, the 15-time LPGA Tour winner and a golfing partner of Donald Trump, says the president “cheats like hell” on the golf course.

Pettersen, who has known Trump for a decade and says she is fond of the president even though she does not agree with his policies, was speaking to the Norwegian newspaper Verdens Gang.

“He cheats like hell . . . so I don’t quite know how he is in business,” said Pettersen. “They say that if you cheat at golf, you cheat at business. I’m pretty sure he pays his caddie well, since no matter how far into the woods he hits the ball, it’s in the middle of the fairway when we get there.”

Trump is listed as having a three handicap, a phenomenal achievement for a man in his 70s who also has to find time to run a country.

Pettersen is a little sceptical of that figure.

“He always says he is the world’s best putter. But in all the times I’ve played him, he’s never come close to breaking 80,” she said. “But what’s strange is that every time I talk to him he says he just golfed a 69, or that he set a new course record or won a club championship some place. I just laugh. I’m someone who likes being teased and I like teasing others, and Trump takes it well, and that must be why he likes me.”

The Norwegian, who reached No 2 in the world rankings and has career earnings of $14 million (€11.3 million), said that Trump was a more complex figure than his public persona suggests and “cares” about issues important to him. She did, however, say she did not agree with his politics.

“I’m not a supporter of what he says or stands for,” Pettersen said. “I thought it was very strange during the presidential campaign that he wasn’t smarter about how he communicated. He could have won more easily, but made some blunders with his statements. That’s because he is so stubborn. He has not changed five millimetres since becoming president.”

Cheating in golf is not restricted to Republican presidents, however. Bill Clinton was famed for taking “mulligans” or uncounted strokes if he was displeased with his initial effort.

“Playing partners don’t just give [Clinton] gimme putts,” wrote Don Van Natta Jr in a book about golfing presidents. “They give him gimme fairway shots, and gimme drives, and gimme chip shots. If someone makes a par, Clinton gets a par, too. If everyone makes a triple-bogey, Clinton gets a double-bogey.” – Guardian service