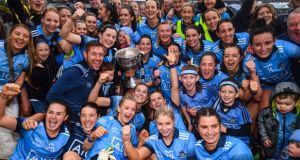 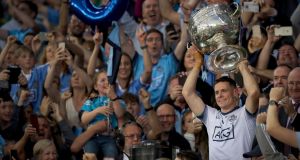 Dublin’s goalkeeper and captain Stephen Cluxton lifts the Sam Maguire trophy after Dublin claimed a fifth title in a row when beating Kerry in the All Ireland final at Croke Park on September 14th. Photograph: INPHO

Dublin City Council has said it decided to make a homecoming event next week for Dublin’s men and women’s victorious Gaelic football teams a ticket only event due to health and safety concerns,

Around 3,500 general release tickets for the official homecoming event planned for Merrion Square on Sunday, September 29th were snapped up within an hour of being made available on Monday morning, prompting the Lord Mayor of Dublin Paul McAuliffe to defend the decision.

He said the decision to move the event from the usual location in Smithfield to Merrion Square was to increase the number of fans who could attend.

Dublin City Council said the remaining 11,000 tickets for the event have been allocated to the Dublin County Board and Dublin Ladies Gaelic Football Association for dispersal.

Information on how to apply for these tickets will be sent out later on Monday by Dublin GAA clubs.

Mr McAuliffe said: “Merrion Square is the largest venue Dublin city has which does not involve a closure of the Luas line.

“College Green would not hold as many and the great Dublin Bike Ride is taking place in the Phoenix Park that day,” he said.

The Fianna Fail councillor said the decision to limit the event to ticket holders was based on advice from “the event controller in consultation with the gardaí for the safety of those attending”.

“Previous experiences such as the Christmas lights led to events being cancelled on the day and we did not want to see that happening. The speed at which it has been allocated has proved these concerns valid.”

Mr McAuliffe said while some people may be disappointed every measure had been taken to “ensure the maximum number of genuine fans are accommodated”.

On Monday night, Councillors called for an open top bus to be used to bring the team through the streets of Dublin to facilitate disappointed fans who did not secure tickets. Head of planning Richard Shakespeare said this was now being considered.

The homecoming will feature performances from Keywest and Eoin Thomas and The Rising Sons with gates opening at 1.30pm.

These acts will be followed by interviews with former Dublin football stars hosted by Marty Morrissey and the showcase of a specially commissioned video of Dublin wins from 1891 to 2018 as well as highlights from both the men’s and women’s matches.

The senior men’s Gaelic football team claimed a historic fifth All-Ireland championship in a row earlier this month while the women’s team secured their third title in a row.

Dublin City Council said no alcohol will be permitted at the event and said searches will be in place at access points. They have asked fans not to bring bags bigger than A4 size or any large flags or flag poles.

Merrion Square South and East, Fitzwilliam Street Lower and Mount Street Upper will be closed to traffic from 6pm on Saturday, September 28th and there is no parking at the event.