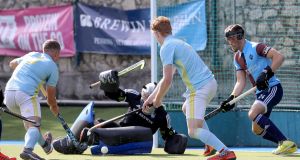 UCD made a major statement that they are ready to do some damage in the men’s EY Hockey League this season as they ran up a fully merited 3-1 win over Three Rock Rovers at Grange Road.

Confident and brash, the students lived every minute of their tie against the reigning Champions Trophy holders, showing they are aiming for far more than simple survival following promotion to the national stage.

They have attracted some serious talent with last season’s top scorer Guy Sarratt and Irish under-21 internationals Conor Empey, Alex Flynn and Cian Murphy among a glut of new arrivals.

Empey, in his first game since switching from Rovers, broke the deadlock early on and while Ben Walker equalised before half-time, sweet strikes from Jazze Henry and Sarratt meant UCD were out of sight with something to spare.

After that, every clean tackle and breakdown was greeted with boisterous cheers from the sky-blue sideline.

Coach Michael Styles did attempt to temper expectations afterwards, admitting opening day always brings that extra energy, but this was a fine performance that suggests a top-half finish is a realistic target.

For Three Rock, they were also adapting to big changes in their squad with nine of last year’s quadruple winners not available this time with Daragh Walsh, Luke Madeley and Jamie Carr all joining the pro ranks in Belgium.

Seven fresh faces have arrived with Welsh international James Kyriakides and Waterford’s Ben Johnson chief among them while Sam Grace, Ali Haughton and James Walker have returned to the fold.

Under new coach Elun Hack, things are taking a little longer to gel but there should be enough quality players in the camp to be in decent shape as the season progresses.

The ones to catch, however, are undoubtedly Lisnagarvey who thumped Pembroke 6-0 in Hillsborough with James Lorimer getting a hat-trick.

The other promoted side, Corinthian, were denied all three points by a late Ryan Burgess drag-flick to earn Annadale a 2-2 draw at Whitechurch Park.

Jack Perdue had given the sizeable home support cause to celebrate when his second-half double had the reds in front deep into the game.

Stephen Brownlow struck a last-second winner for Glenanne in their 3-2 success against YMCA in a tie moved, at short notice, to Wesley College after St Andrew’s was not available for use.