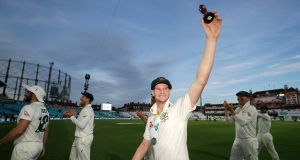 Steve Smith of Australia celebrate with the Urn after Australian drew the series to retain the Ashes during day four of the fifth Test against England at The Oval in London. Photograph: Ryan Pierse/Getty Images

The defining moment – we always have to have one of those at this time of year – came in mid-afternoon. Up strode the noble Stuart Broad from the Pavilion End, a gallant, gnarled old warrior in this campaign, who has never relented in his pursuit of the Ashes. He banged down another delivery, just short of a length and on the stumps. Steve Smith was on strike, shuffling towards the City of London and he flicked the ball away on the leg side from the middle of his bat.

So what’s new here? The ball travelled fast but in the air towards fine leg. But there was a fielder, stationed at leg slip, Ben Stokes, who has licence to roam in this England side, to go wherever he senses the ball might end up. He dived to his left to make the catch before hurling the ball skywards. There was a moment of disbelief among the crowd and even among the England players at what had just happened. Smith was out for a paltry 23. Stokes was embraced; Root, who has been driven to distraction throughout this series by Smith, punched the air with abandon. Surely victory was around the corner now. And it was by 135 runs despite a defiant century from Matthew Wade.

That mixture of relief and jubilation upon this dismissal among the England players encapsulated the impact that Smith has had on this series, the 21st century Bradman who was the foundation of every Australian innings. In fact Bradman had far more support from capable batsmen in the 30s than Smith ever did in 2019.

For all the efforts of Pat Cummins and Josh Hazlewood, two bowlers, who are capable of joining the list of great Australian pacemen, Smith is the man that ensured the retention of the Ashes; it is remarkable that his 774 runs have not secured a series victory. And it was obvious that he should be the recipient of the Compton/Miller award for the man of the series, which is decided by the members of the press corps (it was almost a unanimous decision – there is always one).

On this historic day of Smith failure Australia needed someone else to keep them afloat and it came in the form of Wade, the little battler from Tasmania, who is not noted for his reticence. They were set a target of 399 for victory after the remarkable sight of Broad cracking two short balls from Cummins over the distant leg-side boundary early in the morning.

Soon Broad was back in more familiar territory, running in from the Pavilion End and tormenting left-handed Australian batsmen. First he dismissed Marcus Harris, who has had a wretched three Tests, by knocking his off-stump out of the ground. Then he dispatched David Warner, who was neatly snaffled by Rory Burns at third slip.

This was the seventh time in 10 knocks that Broad has dismissed Warner in this series, which is a record. Warner’s total number of runs – 95 – and his average – 9.50 – is the lowest ever in a five-Test series. It is worse than the output of Kiwi opener John D’Arcy on New Zealand’s 1958 tour of England. In fact the record speaks of Warner’s high standing in the game since he retained his place throughout this torrid run. It is also remarkable that in one innings – at Headingley – Warner made 61, which can now be regarded as a false dawn.

Marnus Labuschagne failed for the first time in the series when he fell victim to an alert stumping by Jonny Bairstow, who noticed that the batsman’s right foot had crept out of the crease even though he was defending at the time. Even so, expect to see more of Labuschagne, who has done everything right in this series – except score a century. Then Smith departed and a swift conclusion was in prospect.

Wade ensured this would not be the case and he batted with great skill and spirit. He took three consecutive fours off Jack Leach in an otherwise miserly spell from the left-armer and was never shackled, irrepressibly annoying his opponents yet exhibiting great touch along the way.

Mitchell Marsh, caught off a Woakes no-ball early on, kept Wade company for 17 overs whereupon he was caught at short-leg off Root, who bowled some respectable off-breaks. Then came a captivating duel between Jofra Archer and Wade, team-mates in Hobart in the Big Bash, though there was little sign of a deep and lasting friendship in their exchanges in the middle. Archer peppered Wade with bouncers, occasionally exceeding 96mph in an eight-over spell. Wade dealt with this barrage very well, ducking bouncers with fine judgment in between the odd boundary. Yet another full house lapped up this spectacle.

Archer remained wicketless and Wade reached a much deserved century, his fourth in Test cricket. But England kept picking up wickets before the situation became too serious; Leach trapped Paine in front of his stumps; Cummins edged off Broad and Root had Wade stumped for a magnificent 117.

Then suddenly it was all over courtesy of two fine catches from Root off the bowling of a grateful Leach. Nathan Lyon and Hazlewood were caught in the ring from consecutive deliveries. Whereupon two exhausted team shook hands after the first drawn Ashes series for 47 years. No matter the quality of the teams – there have been brilliant performances and dire ones throughout – there has seldom been a dull moment. – Guardian