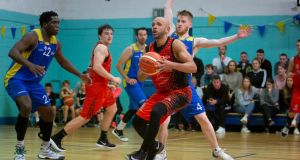 Isaac Westbrooks returned to action for Pyrobel Killester against DCU Saints and scored 24 points in a 83-75 away win.

Both of last season’s top two teams took a tumble in the opening round of the 2019/20 Basketball Ireland Men’s Super League, with reigning champions Garvey’s Tralee Warriors falling to UCD Marian in the Kingdom in a nail-biter, while Griffith College Templeogue lost out to Belfast Star after overtime in a thriller.

Down in Kerry, a fantastic first half display from the hosts – who were without the services of Kieran Donaghy – saw Keith Jumper, Daniel Jokubaitis and Ivan Bogdanovic to the fore on the scoring to send them into a 43-30 point half -time lead.

Marian came back in style though in a third quarter that was led by Neil Baynes, to edge them into a four-point lead at the end of the period, 52-56.

The drama was far from over though, as the fourth quarter delivered a nail-biting finish as the lead changed hands on numerous occasions. With just under a minute to go, a free-throw from UCD’s Barry Drumm saw the score at 72-71 in favour of Tralee. Drumm was on hand again moments later though to float home the winning score and see Marian win out by one, 72-73.

Speaking to Alan Cantwell afterwards, Marian coach Ioannis Liapakis stated: “It was an amazing game. It was a great game for people to watch and for us to play. Both teams deserved to win the game and we were the lucky ones. Everything counts now for us, every win is like a cup final from now on.”

Nothing separated the sides throughout, with the teams tied at 37 apiece at half-time. A phenomenal 34-point display from Lorcan Murphy was one of the main talking points of the game, while Star’s Delaney Blaylock (25 points) and Keelan Cairns (22 points) were also to the fore.

Despite leading 74-80 with just 1.06 to play in the fourth quarter, Templeogue just couldn’t hold on to the margin, and Star stormed home some big baskets to tie the game at 80-80 and force overtime. They truly found their shooting range in this period, as it began to rain threes in De La Salle and Star held on to win 94-92.

Coach Adrian Fulton said: “We are obviously thrilled with the win. Templeogue are a super team who beat us three times last year, so it’s nice to finally be on the right side of the result for a change. Lorcan Murphy was off the charts tonight in the second half, and we were down 15 at one stage in the third quarter. The players deserve great credit, it’s encouraging when they refused to quit when we were on the ropes.”

Elsewhere around the league, Coughlan C&S Neptune got their season off to a flying start, running out 88-71 point winners over Keane’s SuperValu Killorglin.

Spaniard Nil Sabata Vila dominated on both ends of the floor for the storied Cork side, with player/coach Lehmon Colbert chipping in with 12 points and Roy Downey and Kyle Hosford also impressing.

Pyrobel Killester ground out a hard-earned 75-83 point win on the road to neighbours, DCU Saints. Killester welcomed Isaac Westbrooks back into the fold and he made his mark immediately, finishing the game out with 24 points.

Good performances from Farouq Raheem – who was particularly strong on the defensive end – Tomas Fernandez and Keith Anderson kept Killester’s scoring ticking over in the face of a hugely determined DCU Saints side, with Mike Bonaparte, Martins Provizors and Charlie Coombes shining brightest.

The other Dublin derby saw the battle of the newcomers as Abbey Seals Dublin Lions hosted DBS Éanna in Clondalkin.

A massive first quarter from the visitors set the tone for the game, as they took an early 9-26 lead into the second to see Lions on the back foot from early on.

Standout performances from Éanna’s Stefan Zecevic, Daniel Heaney and Neil Lynch kept the scores raining in to help them to a first Super League win.

Elsewhere, Maree came out on top of the big Galway derby meanwhile, running out 58-70 point winners over Moycullen at NUIG. Darin Johnson led the scoring for Maree, finishing the game out with 24 points.

A strong third quarter from Moycullen saw them close the gap back to seven points thanks to good work from Connor Curran, but Maree took back control in the fourth and pushed on to win by 12 in the end.