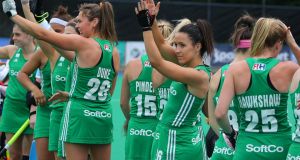 The Ireland women’s team will face Canada in a two-legged playoff for a spot at the Olympics. Photo: Jonathan Porter/Inpho

Leinster Rugby and Hockey Ireland are believed to have come to an agreement to build a temporary ‘pop up’ synthetic hockey pitch on the rugby pitch in Energia Park at Donnybrook, the Irish home of the Women’s Six Nations Championship in rugby.

The plan, following a meeting between Leinster Rugby chief executive Mick Dawson and Hockey Ireland officials, will use the latest in pitch technology to put the surface in place for the two women’s Olympic qualifying matches involving Ireland and Canada.

Ireland were drawn at home and face Canada in the double header on November 2nd-3rd with the winner over the two legs earning a place in the Tokyo Olympic Games next July. The Irish women’s hockey team have never competed in an Olympic Games.

It will be the first time such a pitch has been used on this island and will take several days to construct and remove. The understanding is the cost of bringing the pitch to Ireland will be in the region of €250,000 with the outlay hoped to be covered by ticket sales and various other innovations as well as corporate support over the two days.

Donnybrook, which also hosts the Leinster Schools Senior Cup rugby matches and final, has a capacity of 6,000 including a 2,500 seat covered grandstand. The new international spec hockey pitch in Sports Campus Ireland is not yet complete, although is expected to be come on stream within weeks, while the pitch in UCD, which has also had a new surface recently installed to FIH specifications, has a capacity of 1,800. The Belfield pitch requires temporary seating that can only be constructed over a busy university road used by cars.

The construction of the hockey pitch on top of the current rugby pitch will not damage the synthetic surface that has been in place in the stadium since refurbishment in 2014.

The same pitch technology for the hockey surface was used in recent matches involving the Great Britain men’s and women’s teams who played against New Zealand in June in the FIH Pro League. The pioneering turf was installed in the ground of Premiership rugby club Harlequins at The Stoop in Twickenham.

The portable surface requires up to 65 per cent less water than other performance-based pitches and Irish hockey hopes that with the recent success and popularity of the Irish women’s hockey team after reaching the final of the World Cup last year in London, it could revolutionise the spectating profile of the sport.

The new thinking is that hockey pitches can be dropped onto football and rugby stadiums where stands are already in place and although the cost of installation is significant, the increased capacity and cost benefit of not paying for temporary seating makes it realistic with streamlined ticket sales and corporate packages.

Because of the historic Olympic significance of the two matches, Hockey Ireland believes that the current interest in the women’s team could draw much bigger crowds than the sport has done in the past.

The team has not played a competitive match in Dublin since winning the World Cup silver medal. But in London the support for the Irish team was significantly greater than any of the other nations apart from the home side England.

The games are expected to take place at 7pm on both days and will be broadcast live and promoted on RTÉ television. The evening timing is to avoid any clash with the Rugby World Cup final which takes place in Japan on Saturday 2nd at 9.00am Irish time.

Hockey Ireland have already been in contact with Sue Catton, who was the event manager at The Stoop and who along with England Hockey have provided assistance for the Irish venture. The clubhouses of Old Wesley RFC and Bective Rangers RFC are expected to be used for functions over the two days by agreement with both clubs.

The pitch laid in Donnybrook will be the same as the one used at Twickenham. That project was originally was spearheaded by England Hockey in partnership with synthetic surface provider Polytan, which will also be using the pitch technology at the Tokyo 2020 Olympics.

It is an entirely new departure for Irish hockey to present a one off event in a pre-existing stadium and a test of whether the sport can shift its fan base to support the national team.

South county Dublin has a higher concentration of hockey playing schools and senior clubs than any other district in Ireland, although, the hope is to draw fans from across the island. Like rugby, international hockey is an all island sport and at club level teams compete in an all island league.

In England over 12,000 tickets were sold for the matches in The Stoop with the technology seen as a game changer for the future of international hockey events. The Irish women’s team are currently ranked at eighth in the world to Canada’s 15th.