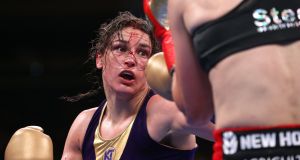 Katie Taylor during her win over Delfine Persoon in New York in June. Photograph: Ed Mulholland/Matchroom/Inpho

Still on the fast track to what has been continued success since turning professional after the Rio Olympics in 2016, the undisputed world lightweight champion Katie Taylor has confirmed she will bid to become a two-weight world champion in Manchester on November 2nd.

In a change from her recent ‘residency’ in the US, the Irish lightweight will step up a division to face WBO super-lightweight champion Christina Linardatou at the Manchester Arena, a venue that is no stranger to the Bray boxer.

Taylor has had a number of professional fights at the Manchester Arena before. She defeated Viviane Obenauf there in 2016 and was back with a points win a year later, defeating Milena Koleva over the distance. But Taylor’s last four fights have all been in the US including her win over Belgium’s Delfine Persoon for a fourth world strap and unification of the lightweight division.

“It’s a new challenge at a new weight and something I’m really excited about,” Taylor told Sky Sports at Tuesday’s press conference in Manchester. The network will be screening the show live.

“I still feel like I have so much left to achieve in the sport and becoming a two-weight World Champion is one of those goals.

“There are still so many huge fights out there for me like the Amanda Serrano fight, a rematch with Delfine Persoon and a fight with Cecilia Brækhus but the first goal is November 2nd and winning another World title.”

Linardatou (31) has lost just once in 13 professional outings and that came at the hands of the Belgian Persoon in 2016. Since then the Dominican Republic born fighter, who lives in Athens, has won four bouts in a row.

“I don’t have any issues making Lightweight so I think I can move comfortably between the two weights,” added Taylor. “I always want to push myself and Christina’s an excellent World Champion.”

It could be a tricky meeting for Taylor after narrowly coming through her brawling bout with Persoon in Madison Square Garden in June. She is expected to meet with Serrano, who chalked up her 37th win against Heather Hardy in New York at the weekend, early next year.

Serrano has also lost and won in two other bouts but has had a winning streak of 23 fights in succession since defeat to Frida Wallberg in April 2012.

For now Linardatou believes she can become the first to inflict a professional defeat on Taylor.

“I plan on leaving England with my title,” she said. “If I need to knock Katie Taylor out in order to retain the title, that’s what I’ll do.”

Taylor will headline the show in Manchester with Mancunian Anthony Crolla also on the card.