Dave Hannigan: Citadel do the storming and open cupcake debate 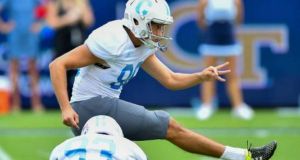 The bookies in Las Vegas reckoned Georgia Tech would beat The Citadel by at least 27 points at Bobby Dodd Stadium in Atlanta last Saturday. Odds-makers were merely acknowledging the fact that the home side had brought in opponents from a lower division, from a college that is a military school, specifically to pad their record with an easy win.

When Jacob Godek subsequently converted a 37-yard field goal in overtime to clinch a famous 27-24 victory for the underdogs, the losers also had to hand over a cheque for $400,000. That’s how much Georgia Tech paid The Citadel to come to their place and roll over. Which they didn’t.

In college grid-iron these are known as guarantee, cupcake or paycheck games. Every weekend powerhouses offer smaller universities significant sums of money to lure them to their stadiums to receive beat-downs. Home fans get to watch their heroes flex their muscles and the visitors leave with enough cash to make the pain and suffering worthwhile.

Occasionally, somebody, like The Citadel, rips up the script, the giant-killing grabs national headlines, and the revelation of the appearance fee amplifies the embarrassment of the institution that forked out. Strangely, very few people ever comment on the immorality of the whole business of paying over the odds for the right to savage minnows.

There’s nothing clandestine about what is, essentially, a form of sporting prostitution either. USA Today recently published a complete list of mismatches for the current season, including the eye-watering amounts changing hands (Tulane got almost $2 million to lose to Auburn earlier this month).

The newspaper also had details about the extras included in the contracts. Some colleges are so desperate for grid-iron’s equivalent of boxing’s tomato cans that they cover the cost of bringing the marching band along, throw in a post-match meal, and even fund the travel of the visitors (the University of Hawaii provided round-trip air fares and hotels for 100 players and staff from Central Arkansas).

When the dubious nature of the business does come up for debate, those involved defend it by saying it affords lesser players the opportunity to play on the biggest stage in front of a massive television audience.

That much may be true. But it also poses a genuine threat to their health. Blue-chip colleges have the biggest, strongest and fastest prospects on their teams, often carrying huge weight advantages that allow them to pound weaker opponents for the duration of these encounters.

Not to mention it’s difficult to believe anybody relishes participating in ludicrously one-sided mismatches that regularly end in 60-, 70- or 80-point drubbings.

When Boston College defeated Howard University by 76-0 back in 2015, both sets of coaches agreed to play shortened third and fourth quarters in order to keep the score down. Like you would do if you were running a children’s game where one side was rampant. It was 62-0 at the half, and the Bison, as the visitors’ team is known, had obviously incurred enough damage to justify the cheque of $350,000 that their administrators were going to take home.

This coming weekend Clemson University, the number one-ranked team in the nation, are paying Charlotte $1 million to be sacrificial lambs before 85,000 at the stadium known, appropriately on this occasion, as Death Valley.

With a coach Dabo Swinney, who is in the middle of a 10-year $93 million contract, and several assistants on $1 million a season, the home team are 42.5-point favourites against a side who played before 12,000 people last week.

This ridiculous excuse for a contest is one of only 25 such fixtures this weekend where the lesser lights will be paid a total of $14 million to be fed to the lions, or in Clemson’s case, the Tigers.

Think of how much money is knocking around the major football colleges that they can hire opponents that are a cross between sparring partners and punching bags for seven-figure sums.

What kind of message is it sending young men to be told to go out and get all your deficiencies exposed on the field because the college wants to make some easy money?

Many of the smaller institutions argue they need these cheques to keep their athletic departments in the black each year. The cash is needed to pay the salaries of everybody associated with the team except, of course, the players out there getting trampled upon by oversized linebackers on their way to the NFL.

The staggering amounts of money involved offer one more illustration of the rancid nature of college football. This is a place where the amateurism regulations are so labyrinthine that a player accepting a free hamburger at McDonalds can jeopardise his scholarship yet he must put his body on the line on Saturdays against superior opponents to benefit the college administration.

If that’s merely further evidence of a sport utterly devoid of morality, it was fitting that in the same week The Citadel’s heroics sparked an all too brief discussion about guarantee games, Tim Tebow, a University of Florida legend and a devout Christian, railed against the growing clamour for players to be paid.

Tebow reckoned this was part of a “selfish culture” and would change college football just “so young kids can earn a dollar”. Much better for everyone that they can’t get their hands on the $14 million in appearance fees being paid this weekend.