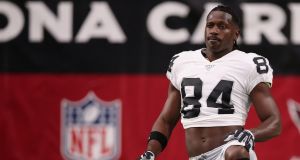 Antonio Brown of the New England Patriots, the most prominent wide receiver in the NFL, has been accused of raping a woman who worked as his trainer, according to a federal lawsuit filed Tuesday in the Southern District of Florida. The lawsuit says that Brown – on three separate occasions, two in June 2017 and another in May 2018 – sexually assaulted the woman, Britney Taylor, a gymnast whom he met while they were attending Central Michigan and later hired as a trainer.

The lawsuit was filed one day after Brown, 31, became a Patriot following a brief, turbulent tenure with the Oakland Raiders that ended when he requested his release last week. Late Tuesday night, the Patriots issued a statement saying that the NFL planned to do its own investigation of the accusations against Brown.

“Mr Brown denies each and every allegation in the lawsuit,” said a statement from Darren Heitner, a lawyer representing Brown. “He will pursue all legal remedies to not only clear his name but to also protect other professional athletes against false accusations.”

Taylor ended her working relationship with Brown, the lawsuit says, but several months later, he contacted her to apologise, and she relented. She was, according to the lawsuit, “swayed by his assurance that he would cease any sexual advances.”

Then, the lawsuit says, on May 20th 2018, Brown forced her onto a bed, pushed her face into the mattress and “forcibly” raped her. She tried to resist him, screaming and repeatedly shouting “no” and “stop,” the lawsuit says, but Brown refused and penetrated her.

The statement from Brown’s lawyer acknowledged at least one instance when the two engaged in consensual sex and also said that “any sexual interaction with Mr Brown was entirely consensual.” The lawsuit says that Taylor told at least three people about these episodes: her mother, Brown’s chef and a member of her church, who advised her to come forward. “As a rape victim of Antonio Brown, deciding to speak out has been an incredibly difficult decision,” Taylor, 28, said in a statement released by her lawyer. “I have found strength in my faith, my family, and from the accounts of other survivors of sexual assault.”

In the statement, she said she would cooperate with the NFL in an investigation. The league’s commissioner, Roger Goodell, has the power to discipline players under a personal conduct policy that does not depend on the outcome of legal proceedings. In 2014, the NFL hired specialists in domestic violence cases to do their own investigations of allegations.

“We take these allegations very seriously,” the Patriots’ statement said. “Under no circumstance does this organisation condone sexual violence or assault. The league has informed us that they will be investigating. We will have no further comment while that investigation takes place.”

An NFL spokesman declined to comment. According to Taylor’s lawsuit, she and Brown met as Bible study partners at Central Michigan and they stayed in contact after Brown reached the NFL, as a sixth-round draft pick of the Pittsburgh Steelers in 2010. Brown spent nine years with the Steelers, being named to the Pro Bowl in seven of them, but his time there ended unhappily. He pressed for a trade after the 2018 season and joined the Raiders, who rarely saw him in uniform. Brown sat out most of training camp, because of a foot injury reportedly sustained in a cryogenic chamber, and also because of league safety rules that prevented him from using his preferred helmet model.

The Raiders ultimately fined Brown $54,000 for failing to practice and conduct detrimental to the team, notifying him with a letter that he later posted to his Instagram account – the same place where he asked to be cut after the team used provisions in his contract to void about $30 million of the deal. – New York Times

Ken Early: Klopp adds spice to ‘uninteresting’ FA Cup replays 06:26
Brian O’Driscoll backs Conor Murray to hold off Cooney challenge 06:00
Dublin and Kerry bring the glamour as Allianz football league returns 06:00
New FAI president wants to bring Brian Kerr back into the fold 06:00
Scotland aiming to go the full Hogg as they look to move on from Japan 06:00
Here is your handy guide to sport on television this week