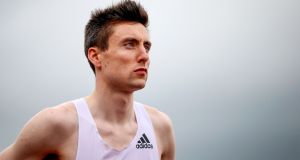 Mark English said he was ‘thrilled’ and ‘relieved’ after receiving an eleventh hour invite to the World Athletics Championships. Photograph: Tommy Dickson/Inpho

An eleventh-hour invite – or seven-day advance notice – will see Mark English in Doha for the start of the World Athletics Championships this Friday, only not without raising fresh question marks over the IAAF qualifying process.

English was initially left frustrated when the Doha entries were announced last Thursday morning, and he found himself a surprise omission from the 800 metres despite appearing well within the qualifying positions under the new event ranking/quotas.

Instead, a number of countries allowed to enter one athlete without any qualifying time got in ahead of him. A further review by the IAAF on Friday, taking out some of the athletes who declined their qualifying place, put English back in the mix, meaning the 26-year-old, who won European Indoor bronze in Glasgow back in March, will now compete in his fourth successive World Championships.

“A long day but I’ve finally been selected for the Doha World Championships,” English commented on Friday night. “Thrilled and relieved, and looking forward to joining a strong Irish athletics team.”

That uncertainty was hardly ideal – and English wasn’t the only one: Athletics New Zealand has called on the IAAF to change its “appalling” selection process after their two-time Olympic 1,500m medallist Nick Willis also missed out on a place, despite appearing to be well within the qualifying quota in his event. As it turned out, Willis also got that seven-day advance notice on Friday night, only by then had started his seasonal break and thus declined it.

Also part of Friday’s late invitations, extended to 130 athletes in all, were Ireland’s Síofra Cléirigh Büttner and Ciara Mageean, both given a slot in the women’s 800m: however Büttner also declined her spot having also ended her season early due to injury, while Mageean is already qualified to run in the 1,500m and will be sticking solely to her preferred event.

In a statement announcing the late call-ups, the IAAF pointed to the number of athletes who declined their qualifying place on ranking/quota: “Having now been able to review the final entries, it is clear that some qualified athletes are currently not able to attend”, said IAAF chief executive Jon Ridgeon. “Therefore, as a federation that always tries to put athletes’ interests first, we have the opportunity to open entries for one last short window in some events where we have yet to reach maximum target entry numbers.”

Still, the lack of transparency around the qualifying process, specifically the event quotas, was raised by English, especially given he initially lost out to countries permitted to send one athlete without a qualifying mark (in his event from Oman, UAE, East Timor, Myanmar, Kosovo, Jordan, Equatorial Guinea and Andorra); New Zealand high-performance director Scott Goodman also said: “I’m pretty disappointed in how they’ve run the process, it was like extracting teeth.”

English’s best this year was the 1:45.94 he ran to take victory at the Birmingham Diamond League, just shy of the automatic 1:45.80. A review of the event quota process (where athletes who don’t qualify on time can still qualify on ranking) will take place after Doha, but it’s already been agreed for next year’s Tokyo Olympics.

In many events standards are considerably stronger than Rio 2016, or indeed at any point in Olympic history, although the world ranking position, allowing athletes to qualify under the event quota, may in some events actually ease the qualification. That qualifying window began on May 1st and will end on June 29th, 2020; the Tokyo Olympics then open on July 24th, 2020, with the athletics events taking place over the last 10 days, from July 31st to August 9th.

The process was originally designed to achieve about 50 per cent of the target numbers for each event through entry standards and the remaining 50 per cent through the event quota/raking. Each country will still be limited to a maximum of three athletes per event: the total athlete quota for Tokyo is 1,900, across the 48 events, ranging from 32 for each field event (men and women), 56 for each sprint event, and up to 80 for the men’s and women’s marathon.

If qualifying for Doha is anything to go by, some uncertainly about Tokyo is likely right up until the eleventh hour.