Sailing: We await Murphy’s next tack as she quits 49erFX campaign with Tingle

Can the Rio silver medallist rekindle Irish Olympic hopes if she returns to the Laser Radial after a three-year-hiatus? 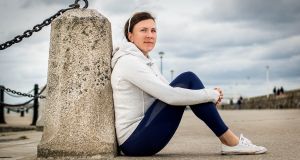 Annalise Murphy in Dún Laoghaire Harbour. She will realise that to be competitive across the wind range in Japan she may again need to change her physique. Photograph: James Crombie/Inpho

With 300 days to Tokyo 2020, could Annalise Murphy rekindle Irish Olympic sailing hopes if the Rio silver medallist returns to the Laser Radial after a three-year-hiatus? That’s the prospect following her decision to quit a short-lived 49erFX campaign with Katie Tingle on Wednesday.

If, as widely expected, Murphy (29) returns to the women’s solo class it will show the depth of her Olympic ambition but is such another late decision by the solo sailor in this quadrennial a recipe for success?

So far the Radial is the only Irish boat qualified for Tokyo, a contrast to the build up to Rio when four boats had secured Olympic berths. If successful Murphy’s return would help to put bite back into any sailing line-up for Tokyo.

Since winning Olympic silver in 2016, Murphy has squeezed in an edition of the Round The World race and launched a skiff campaign. However, the fact her boat Turn the Tide On Plastic finished sixth from seven in the Volvo Ocean Race and she has jumped ship from the 49erFX with little to show for it will not rest easy with Ireland’s greatest Olympic sailor.

Any critical assessment of the 49erFX effort needs to focus on the fact that it was a hastily prepared endeavour which immediately came up against the might of experienced international crews.

Irish Sailing has claimed it was a 14-month campaign, but the pair raced in just six major regattas over six months. It produced very mixed results, which is all that could be expected from such a fledgeling campaign in such a time frame.

It appears that unrealistic expectations had such an impact that the decision to quit was taken in advance of a final Olympic qualification chance this November. If the campaign had continued it might have been better framed as one with Paris 2024 rather than Tokyo as its target.

But now that chapter is closed, Murphy is said to be weighing up her options. There can be no doubt that while lying capsized in the 49erFX fleet in Enoshima this summer the former Laser “breeze queen” must have been relishing the prospect of a return to the Radial at Tokyo’s heavy weather venue. “Japan was a wake-up call”, Murphy said tellingly.

The National Yacht Club ace can readily dial up her world-class heavy-air Laser speed again based on her 12 years’ experience, but she will be the first to realise that to be competitive across the wind range she again may need to change her physique. She has such a blueprint because this kind of transformation prior to Rio was clear in her physical appearance.

Sailors’ weights can be closely guarded secrets, but in the six weeks before the games,Murphy is said to have shed as much as seven kilograms to give herself the greatest chances in Rio’s predicted fickle light airs. There was some irony, therefore, that when she swept to the top of the fleet there she did so in a near gale.

The change in her physique was another sacrifice for an athlete already in peak condition but who wanted to give herself every possible chance. And it was a game-changer because it followed a disappointing fallow period in early 2016 where she struggled with her international results.

Back then Murphy dismissed the challenge of a 17-year-old Aoife Hopkins in the three-event Irish trial for the single Irish Olympic spot.

If Murphy enters the 2020 fray Hopkins is back for another tilt, along with Irish champion Aisling Keller, and both are already qualified for the 2020 trials having secured the nation berth. Significantly, both have been engaged in full-time campaigns and are now World Championship gold fleet finishers. That’s a step up in domestic competition for Murphy.

In an international context the Rio gold medallist Marit Boumeester, who has continued to campaign since 2016, remains a constant top name. However the Dutch star is regularly fighting off a crop of new and youthful pretenders not on the scene four years ago.

All this means is that getting back into the Radial will require a big commitment to get back up to top-flight speed, especially in a phase when the international fleet has never gone faster. As a result it’s a scenario that holds no guarantees for nominations or medals.

Yet such analysis ignores Murphy’s unswerving desire for performance. She has been underestimated many times before and proved many wrong on the biggest stage of all.

Her next tack is eagerly awaited.