Tipperary and Kilkenny play out thrilling draw in Thurles 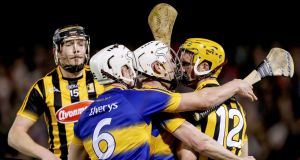 It was an all-but-perfect night’s hurling in Thurles on Saturday. Clearly neither side was at full blast so early in the season, but it pulsed with championship energy – not the finely honed physical conditioning and gossamer touch of summer, but the emotional energy generated by fear of losing.

Kilkenny, a threadbare sort of campaign behind them to date as Brian Cody and his management work to rebuild the team, rose defiantly and overturned an eight-point deficit in the first half and smaller margins later in the match and eventually took the lead for the first time with four minutes left on the clock.

Their defence, only one position the same as the All-Ireland, tightened up on their September tormentors in the Tipp full-forward line – 2-16 from play down to 1-5.

The All-Ireland champions, a month of flattery under their belts, looked stricken by the realisation that their eternal opponents – oppressors more often than rivals in the past 15 years – might actually overcome their manifest shortcomings to puncture the Tipp supremacy in a manner that would not be fatal, but at the same time more wounding than an Allianz League match in March should be.

Psychologically the pressure intensified in the space of a few seconds in the 66th minute. John McGrath weaved into position for a goal shot but Eoin Murphy saved instinctively and Séamus Callanan sent the rebound wide. From the puck-out Cillian Buckley, who put in a tour de force from centrefield, calmly pointed to put the visitors 3-14 to 2-16 ahead.

Kilkenny had their own chances and James Maher too hit a wide. It’s a cliche, and no one deserves anything in sport, but the draw was fair. For a crowd of 14,763 it had been a breathless crescendo in which they played a part, their raucous, rising volume as Callanan – finding his way back into the season – shot from the left wing as indicative as any umpire’s nod that Tipp had retaken the lead in the 59th minute.

A few minutes later, an astonishing passage of play with the ball flying from one end to the other, as hooks and blocks despairingly cut out scoring chances, was uninterrupted by a break for a couple of minutes. When referee James Owens whistled for a free out to Tipperary, the crowd rose in ovation.

Kilkenny’s diligent resistance was illuminated by the welcome and familiar dazzle of TJ Reid and Richie Hogan. The former’s three goals included two penalties hit with such fearsome accuracy that Darragh Mooney hardly budged and a first strike hit at the end of an evasive arc around the Tipp defence from 25 metres. Hogan was pushed forward and delivered an excellent second half, flighting over four points, each of them important instalments in the recovery fund.

Cody was especially pleased with the obstinate character of the performance, but characteristically wary of exaggerated reaction.

“I learned that what I always feel we’re capable of, they’re still capable of. I think they showed the spirit tonight that we always need to show. I would imagine several questions were being asked of the players. Tonight was just one game. Just because the response is good tonight, the thing is only starting. It’s only March. But I think it was still an important challenge we faced tonight and we faced it well.”

Mistakes in defence set up John McGrath for an early, scrambled goal, and yielded possession for both McGrath brothers to find O’Dwyer, whose lovely stick pass sent in the fast and industrious Niall O’Meara for a second in the 22nd minute.

Now leading by eight, 2-7 to 1-2, the All-Ireland champions allowed their attention to wander. Pádraic Maher allowed himself unusually to be squeezed over the sideline on one of his bursts forward. Almost immediately Kilkenny corner forward Alan Murphy was fouled by Michael Cahill under a dropping ball.

An umpire signalled for a 65, but the referee called a penalty, which Reid dispatched, and afterwards Tipp manager Michael Ryan had no complaints. His team steadied after the Kilkenny onslaught to lead by four at half-time.

Reid’s second penalty levelled the match after Pádraic Maher brought down Blanchfield in the 56th minute and the stakes increased as both teams went all in – Kilkenny to leave a psychological scar and Tipp not to let them.

Michael Ryan is probably not unhappy at the reality check.

“Momentum flips. That’s the beauty of the game. From looking reasonably comfortable, you’re chasing it. That’s brilliant; what an experience in March!

“The way both teams went at that game was really great. It served up a great contest under lights – I’m not a lover of it [floodlighting], but I thought that as good a spectacle on a Saturday evening as you’ll get anywhere.”