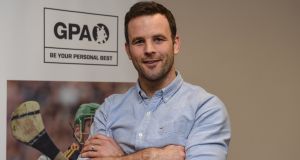 David Collins has been named the new president of the GPA. Photograph: GPA

Former Galway hurler David Collins has been named the new President of the Gaelic Players Association.

Collins replaces Dermot Earley, who stepped down from the role on Wednesday after three years following his appointment as chief executive of the GPA.

32-year-old Collins won one Leinster medal during a lengthy career with Galway, and was made captain of the county in 2007.

He has been a member of the GPA since 2005 and a member of the National Executive Committee since 2011. Collins also served as GPA Secretary from 2013 through 2015, a role currently held by Dublin Footballer Paul Flynn.

On his appointment, Collins said: “To have been chosen as GPA President by our NEC which is made up of exceptionally dedicated players and former players who are devoted to the welfare of GPA members, is an absolute honor and a great privilege for both myself and my family.

“I have always been passionate about our players’ welfare and the relentless work that the GPA is undertaking to better the lives of each and every member.

“Having been involved as player rep since 2005 and at the Executive level since 2011, I am delighted to be able to continue my involvement with the GPA in this new capacity as President. I look forward to working with our recently elected CEO Dermot Earley and his team to continually strive to enrich the lives of our players who dedicate their lives to our games.”

“I have always strongly admired the work that David has done, both on and off the field, and I look forward to working with him closely in his new role as GPA President.”