Lee Chin accepts NHL comments were ‘not a true reflection’ 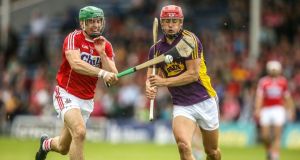 Lee Chin has qualified comments he made about his experience with the Vancouver Canucks. Photograph: Cathal Noonan/Inpho

Lee Chin has apologised for his comments about his perceived levels of drinking and fighting in professional ice hockey.

He said in a statement that “he accepts that what he said is not a true reflection of the culture of the Vancouver Canucks or its players and does not reflect what he witnessed during his time with the team. At no time did Lee seek to call into question the professionalism of the Vancouver Canucks, its staff, management and players which he found to be exemplary.”

Some people – at least some NHL reporters – have suggested his comment must been exaggerated or somehow taken out of context.

If anything, the Wexford hurler’s comments presented in a somewhat understated manner – as the relevant transcript of Thursday’s interview reveals (see below) – Lee also claimed that NHL players would typically drink continuously while flying to games in places such as Boston or New York.

The Wexford hurler spent a week training with the Vancouver Canucks last month as part of AIB-supported The Toughest Trade series. During a publicity interview on Thursday, Chin also raised the issue of the perceived drinking culture entirely unprompted, after being asked whether his temporary trade from amateur hurling to professional ice hockey made him wonder if he too could ever have made it within the professional sporting environment.

He was asked that age 24, now, if he was to go back four or five years, could he have made it the professional environment?

“I suppose when I was a young guy, back when I was 19, 20 years of age, I believed that I could have made it in a professional environment, yeah, if I was just given the tools to work with.

“For myself, I suppose, all an athlete wants to do is reach the height of their potential, and just know that he ticked every box, and was given everything in place to be the best he can be. I suppose with us, it’s not possible to reach that level, when you also have to work, and there are different elements to our game.”

Would he swap his hurling for whatever opportunity came that way?

“No, I wouldn’t. There’s obviously no money involved in what we do, so I wouldn’t do it for the money. Obviously it would be a massive help, and as I said earlier, Erik [Gudbranson, Canucks player] is on four million a year, to do what he loves.

“Obviously I do what I love, but I wouldn’t give it up. I love the game, and I know the likes of those guys are so passionate about their game. They love it too.

“I think a couple of them, when I mentioned it to them that we were amateurs, that we don’t get paid, they looked at me as if I had two heads at times, as if to say why are you so stupid, why do you do it?

“I was sitting having lunch with them one day. It was called a lunch-in, and it was after I had played the game, on the Sunday, and they done a thing with the alumni and senior team, kind of because the alumni thing is a massive part of the Canucks organisation, and they try to keep the players in touch, the alumni being all the past players

“So they have this thing every year, called the lunch-in, and I was invited, and had lunch with them all.

“And Erik Gudbranson was sitting across from me, with one of this team-mates, and then I had a guy here beside me, who trained me during the week, Manny Malhotra. Erik was injured, but the other guy, the two of them ordered two pints of Heineken or something, and I had a glass of water in front of me.

“And I was thinking ‘if these guys are playing tomorrow, are the two of them injured?’ So I had to ask this lad what’s the story. And I just asked, ‘are you playing tomorrow?’ and he says ‘I am, yeah’, and looked at me . . . . ‘Are you having a pint, yeah?’ And he was looking at me as if ‘what’s the big deal, what’s the problem?

“And they have this thing called a ‘change up’, if a player is not on form, or he’s not scoring. Either the manager or the other players will just call a ‘change up’. And basically that lad has to go out and ruin himself for a night, then come back the next day and play the game, to play with the attitude of you just don’t care, that kind of thing.”

What, just send them out to blow off a bit of steam?

“Just send him out, go out and drink 20 pints, go off with a couple of women, and do what you want. And come back to me the next day. That’s pretty much the way they live.

“And I remember Manny was telling me that they might fly from say New York to Boston to play a game say on the Monday night, and then they’d have another game on Wednesday night, and that the air hostesses on their private plane have so much drink waiting for them on the plane when they’re going to fly over, so they drink all that Monday night, probably get to Boston and go out Monday night, get up Tuesday and then play the game Wednesday.”

He was then asked what the sports science people must think?

“This is the culture, this is what they believe in, that they’ve got to be able to let off that steam. I don’t know if they look at the scientifics behind it. I know we do.”

So more drinking and more fighting is what you encourage?

“More drinking and more fighting, that’s what I’m encouraging,” he concluded, with a smile.