Lee Chin surprised by levels of drinking and fighting in NHL

‘They were lowering pints the day before a game, and that was sitting at lunch,’ he said 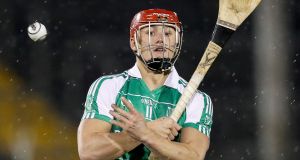 The last thing Lee Chin expected to find in his temporary trade from amateur hurling to professional ice hockey was their perfectly acceptable fighting and drinking culture, more so than any superior level of fitness and commitment.

If anything, he thought, it might have been the other way round.

The Wexford hurler spent a week training with the Vancouver Canucks last month, one of the top teams in the professional NHL, as part of AIB-supported Toughest Trade series. What clearly surprised him most wasn’t any superior physical fitness or professional commitment but their opening relaxed attitude to fighting and drinking, the former during obviously during matches only, the latter however seemingly acceptable the day before a competitive game.

Chin had no previous experience in the game, beyond a little ice skating in Wexford around Christmas time, yet what possibly impressed him most was the permitted of levels of physicality and social drinking.

“When I told them I didn’t get paid they couldn’t believe it,” says Chin, “were looking at me as if I had two heads at times, as if to say why are you so stupid, why do you do it.

“But I picked a lot of brains, asked a lot of lads, what was the fighting about. What fascinated me was the player power, the whole running that allows players throw off the gloves and fight. I thought at first this was so barbaric, allowed to go on in sport, it’s crazy like.

“The players were able to explain, and I was so intrigued by it and the reasoning behind it. Literally it’s the players that police that ruling, and there’s nothing in the rule book to say you can’t do it. It’s there for the players to protect them. If a guy is acting the maggot with another player on the ice, he has to pay for it, and that’s the way it’s done.”

The drinking culture surprised him even more, something he admitted he wouldn’t dare do sitting at home, let alone in front of Wexford hurling manager Davy Fitzergald.

“The drinking culture they have, I couldn’t believe it. They were lowering pints the day before a game. And that was sitting at lunch.

“It was after we played a game on a Sunday, and there was a lunch with the alumni team on the Monday. I was invited, with Erik Gudbransonm, and one of his team mates beside him. I had a glass a water. Erik was injured, but I asked his team mate if he was playing tomorrow and he said ‘’yeah, what’s the big deal?’

“And they have this thing called a ‘change up’, when a player is not on form, not scoring. The manager will call a ‘change up’, and basically that player has to go out and ruin himself for the night, then come back the next day, with the attitude of you just don’t care.

“So they send him out, drink 20 pints, go off with a couple of women, whatever he wants. And come back the next day. That’s the way they live. It’s the culture, what they believe in, letting off steam like that. I don’t know if they look at the science behind it.”

1 Gerry Thornley: Talk of Anglo-French hegemony is over the top
2 What next for green jersey hero Sam Bennett after the toughest of Tours?
3 Tour de Covid tells us to cheer, clap and don’t ask questions
4 The Offload: Saracens prove Pro14 is not fit for purpose
5 Chris Wilder confused by John Egan’s red card at Villa Park
Real news has value SUBSCRIBE