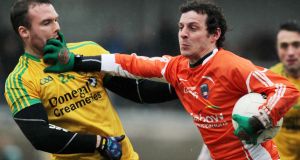 Jamie Clarke in action against Donegal: “It was being over there and spending time away that made me realise what was at home.” Photograph: Jonathan Porter/Presseye/Inpho

Yep, this is the spot alright. There’s a dude with a hairy beard in the corner rolling a cigarette, ping-ponging smalltalk with a girl in saucer-wide glasses at the next table over. He has a yellowing paperback by Anais Nin in front of him, she is swiping at the Kindle app on her iPad.

Sufjan Stevens plays on the speaker system as a barista waves away the apology of a punter who is 10c short on his coffee. We’re not in Greenwich Village but you can see why Jamie Clarke picked it as a meeting place.

Living in Dublin, working in the city, scooting up and down the road to training. It’s his first full league campaign since 2014, only his second ever since he joined the Armagh panel in 2010. Crossmaglen usually had first pull on him in springtime most years; life came calling in 2016.

“I went through the Ireland Institute in Pittsburgh. I basically had to put together a working plan, so much documentation had to be done. The guy I was dealing with was ruthless enough actually.

“He was an Irish guy and he was well-disposed towards me but at the same time he was ringing me up going, ‘I’m reading stuff in the media about you coming over here looking to open up a coffee shop. What’s that about? You never mentioned that to me.’

“And I’m going, ‘Ah, hang on, no, that’s not what I’m going over for.’ I just needed a social security number. I was working for a friend of mine from Longford who runs a bar over there. They were based in Manhattan so it wasn’t the whole Irish thing. I was in there with him doing social media marketing and working behind the bar as well. It was grand. Making money, living on Park Avenue.”

“It’s not that I can’t fit in here,” he told Niblock. “It’s probably that I don’t want to. Ultimately, the only reason I am here is because of football. I don’t enjoy it as much because of the pressures of having to win all the time and wanting to win just for the sake of winning so nobody else can win. There’s a lot more to life than kicking the ball over the bar.”

In a small place, words can do damage, regardless of how softly they’re spoken. A year on, Clarke is more than happy with how he came across.

“That was important to me, that documentary, because I can portray myself sometimes as someone who doesn’t give a shite. Whereas the truth is that when it comes to your life, you only get one shot at it. I didn’t want to look like someone who thought he was better than the place he grew up or anything like that.

“Especially for the older generation in Cross, it was important to me that I didn’t say anything that would upset them. But I realised once I started talking, that I wasn’t having to mind my words or anything. I was just honest about what I wanted.

“It was more about getting out and seeing what was out in the world. It wasn’t about leaving Crossmaglen, it wasn’t about leaving football. Definitely not. Like, if I had just left Cross and gone travelling around Ireland, there’s no way I could be on this island and not play football. Even if I’d gone to London, I would have been close enough that the pull of football would have had me over and back a bit. So it was really a matter of nearly forcing myself far enough away so I’d have no choice in the matter.”

New York was a place he first visited in 2012. Roscommon knocked them out of the championship on the first Saturday in July and himself, Ciarán McKeever and Brendan Donaghy were on a plane just over a week later. Ever since, he has tipped over and back when the mood struck and the game allowed. This time, he just wanted to get gone.

“I think players have become more and more comfortable about making that decision to go away. Four or five years ago, I think it was more out of the question for a lot of guys. I think more players are giving it some thought now. Ultimately, what do you get out of it? For me, it was a realisation of what I wanted to do with Armagh. So one year out of a career really does no harm.”

He played for Longford in the New York championship and played well. By the time the final came around, he more or less knew he’d be coming home at the end of the year. He didn’t tell anyone for a while but he knew himself. There was a life to go back to that he couldn’t leave alone. One that could easily drift by if he let it.

“I think if I had missed this [2017]championship, that might potentially have been the end of it. If I’d stayed out there two years, coming back at 28, 29, trying to leave legacy, I just think that maybe that wouldn’t have been the right thing to do. Especially from an Armagh point of view with younger players coming through.

“I don’t think it would have been right to come back in. You can go away for a year and nobody really minds too much. Go away for more than that… it’s a difficult situation because people get offended anyway, you know?”

The Conor McGregor fight in Madison Square Garden in November brought Kieran McGeeney to town. They met among company one night and he was delighted when McGeeney wrapped him in a genuine embrace.

“Of course! Sure you’re nervous every time you meet Kieran. Ah look, I think people have the wrong impression of him. He’s an innovative coach. He’s not your stereotypical GAA coach. He’s doing so much work behind the scenes that nobody ever sees. It’s difficult because when the players don’t perform, he takes all the flak for it.

“We met that night but planned to meet just the two of us the next morning. We got a coffee and went and sat in Bryant Park. It’s funny because we were looking around us going, ‘It’s unreal, isn’t it? But it’s not, you know…’ He loves New York too. But we know what it’s like being athletes and wanting to be winners.

“He told me his plans and what he wanted to achieve. And I told him that I wanted to be part of it and would he have me back? He said no bother and that the main ingredient is to put your head down and work hard.”

No arguments. No bullshit. After a rocky start, Armagh are up to second in Division Three and have a spring-defining encounter with Louth in Drogheda next weekend. They’re the top scorers in the country, albeit their 11-60 total was fattened by the annihilation of Offaly last Sunday. Clarke is tootling away in the corner, finding his range, attracting cover and scoring anyway.

Feeling the good of having been away – even as he looks as if he never was.

1 A kick in the teeth for sports, and a nail in the coffin for communities
2 Born to ride, born to win: Sam Bennett, the making of a green machine
3 West Ham boss David Moyes tests positive for coronavirus ahead of Hull game
4 Sam Bennett hoping Tour de France success does not bring celebrity status
5 Awarding of 2023 Rugby World Cup to France part of Laporte investigation
Real news has value SUBSCRIBE