Neil McManus on watching Antrim heartbreak from a shack in Vietnam 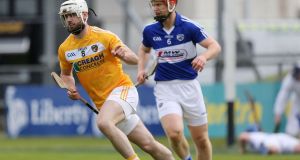 Neil McManus is determined to help Antrim hurling kick on to the next level. Photo: Inpho

There was a moment in Wednesday’s launch of the joint RNLI-GAA initiative to support the Respect the Water campaign when MC Micheál Ó Muircheartaigh threw in a general question on Antrim hurling’s dreams of winning the All-Ireland.

Neil McManus, one of the players promoting the event, felt obliged to draw the audience’s attention to the fact that the county was now competing in the Christy Ring Cup and hoping to build a challenge from there.

It was an honest response, a realistic appraisal albeit underscored by a sense of regret. Beyond the Canal Café in Croke Park where the question was asked lay the pitch where McManus had played in a senior club All-Ireland final only last year and on which just six seasons previously he had scored eight points as Antrim beat Dublin and reached an All-Ireland quarter-final.

Yet by last year they were losing a controversial Ring final to Meath by a point after extra-time in a re-fixture brought about by a scoreboard error. McManus missed the drama or at least followed it remotely from Vietnam.

“I was watching (both matches) on GAA Go in a little shack, maybe a tent for the second one. Just watching it on my fiancée’s iPad. She said it was one of the worst bits of the trip because I didn’t speak for three days after it.”

Had he felt guilty for not being there?

“I don’t think you make those decisions. You commit to something and you go with it. Every minute of every year that I’ve been with Antrim, 11 odd years, I’ve given everything I had to it. I had decided that we were going to do a little bit of travelling before we got married – I wouldn’t take a minute of it back.”

McManus had earlier had fun at the expense of Kilkenny’s now-retired Jackie Tyrrell, one of his generation’s avid All-Ireland medal collectors, by recalling how he had weathered the cold water immersion techniques at the RNLI training centre in Poole, England.

There was a couple of references to how someone from Cushendall in the Glens of Antrim wouldn’t feel the cold in the same way as others but anyone listening wouldn’t have had to stretch for the metaphors.

Speaking afterwards he didn’t relent: “They only think they’re tough. Try hurling with Antrim for a few years!”

The counties’ paths crossed in January’s Walsh Cup when the Leinster champions won by 36 points.

“There’s no comparison at the minute between where Antrim are at and where Kilkenny are at,” said McManus now back playing after his travels. “We have to be realistic about where we are at. We’re in Division Two A, hurling in the Christy Ring, and we have to go back to the start. Put the building blocks, the foundations back in place, of honest, hard work. If you get those two things right, the hurling performances will follow.

“It’s so much easier if you are playing for Tipperary or Kilkenny to put your life on hold and give every ounce of your being to that because you do see success at the end of the rainbow. You see days at Croke Park. That’s not there for Antrim at the minute but think there has definitely been a corner turned as regards to the standards that are in place and what is expected of people as an Antrim hurler.”

Currently the county is joint-top of Division Two A with Carlow and hopeful of promotion. Again, he’s realistic when assessing the cause of Antrim’s decline, choosing not to blame the GAA for neglecting them.

“First of all, I think you’re in control of your own destiny, no matter what you do in life and you have to make it work. I think the onus is on Antrim to get it right. It’s very easy for me to stand here now and say we’re not being backed by Croke Park or whatever, I think we have to get our own house in order.

“I think we’ve started to do that at senior level. There’s a lot of work going on behind the scenes at Antrim county board level as well. But the onus is on us. We have to get it right, we have to work hard at it, figure these things out for ourselves.

“We can’t keep waiting because things weren’t massively different in the late 80s and early 90s, whenever Antrim were performing so well. The same pocket of population in the Glens were supplying the vast majority of the players. The geographical situation that we complain about is still the same as it is today and even it’s probably not as bad because Ireland’s getting smaller with every passing year with the developments and infrastructure and the like.

“So I think it’s up to us to grab the bull by the horns and start doing the work to bring Antrim to where I would love to see them.”

He is enthused by the motion passed at last month’s congress, which allows the winners of the Christy Ring to enter the senior championship qualifiers for the MacCarthy Cup.

“I think it’s only a good thing. If, at the end of the day, you won the Christy Ring, that county is out of hurling, finished hurling at the start of June before we even get into the summer effectively. But now it’s added a bit of bite to it because we’re going to have the winners of the Christy Ring competing in the qualifiers.

“That’s happening this year. The 2017 Christy Ring winners will play one of the Leinster teams this year – another added incentive. I think it’s a fantastic motion that’s been brought through Congress and I would fully support it.”