Tipp wary of comparisons to great hurling teams of the past 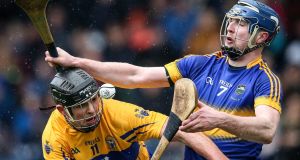 With just over 15 minutes left against Clare last week, Kildangan’s Paul Flynn made his senior debut for Tipperary and contributed a nimble 0-2.

“Fast hands: that is a huge thing at this level,” enthused Ken Hogan when reviewing the win with Ronan Quirke of Tipp FM on Monday evening. The apparent ease with which yet another athletic, silky forward had settled into the Tipperary’s formidable, versatile attacking unit made observers offer dramatic opinions. On RTÉ, Henry Shefflin’s comparison of Tipperary’s squad to the reserves of talent available to the Dublin football team was flattering. But from a Tipperary perspective, it was also highly dangerous.

“One thing we need to be wary about in Tipp is comparing ourselves to great teams over the past 10 or 15 years,” says Darragh Egan.

“Tipp need to create their own identity and that is what Michael Ryan is doing. I know Henry Shefflin said it echoed the Dublin footballers but Michael Ryan won’t want to hear any of that kind of talk. He just wants his panel working hard and then to see where that takes them. He has around 40 lads in there but it is so competitive.”

Egan was an All-Ireland medallist with Tipperary in 2010, a famous win which prevented Kilkenny’s five-in-a-row and provoked wanton forecasts of a Tipperary dynasty. It never happened. The response to Tipp’s win last September could not be more pronounced in its difference.

As anticipated, the squad has been all business in this year’s league. Egan is a school principal in Kildangan and is also highly involved in coaching with the club, who caused a surprise by making it to the Tipperary senior final against Thurles last autumn. About a decade ago, they put a strong emphasis on underage coaching and introduced a policy whereby senior players helped to coach at juvenile level. It had a huge influence and set in motion the journey to the county final.

That match was a steep learning curve: as Egan points out, Thurles had too much for Kildangan to physically cope with. But both Alan and Paul Flynn have since been called in to the senior squad and are among the busy backstage cast pushing for a place on the Sunday matinee programmes.

“Paul looked very sharp last Sunday. I think that Michael Ryan, from the outside looking in, is playing it all so well. Everyone is on their toes. Paul was disappointed that he wasn’t in the 26 for the first few games. But Mick is giving the lads who were on the extended panel last year their shot.

“Paul got in last Sunday because Seamie Callanan was sick and now he has put himself in the shop window. Alan is after winning a Fitzgibbon Cup medal with Mary I and is trying to get into the 26. So Mick is after developing a real competitive environment in which lads know they are not just making up the numbers.”

That was the theme against Clare last Sunday. This time last year, it was clear to anyone watching Tipp play that John McGrath was poised to play a major role in the destination of the McCarthy Cup. Against Clare, McGrath fired 0-10 and was a leader in the team. He, too, had spent a season in the shadows before emerging, it seemed, as a fully formed championship player.

On Sunday he spoke about the group of hurlers just behind him trying to stake their claim. It can take time. Stephen O’Brien, fresh in from the Tipperary footballers, offers a powerful, direct running game to Tipperary’s ethereal attack. Tomas Hamill has been in and around Tipperary’s defensive unit for the previous two years but looked an assured and dominant figure in the heart of their defence against Clare.

“He has had a few cuts at this before at a relatively young age,” Hogan said.

“He was brought into the panel at 19 which maybe is a tad too young looking at it in hindsight but from our perspective Tossy is laying down a marker to make the team. We can talk all we like about lads making the team and coming into county situations but Tossy is exactly what Tipp needs – a strong, mobile physical player with a good head on his shoulders, and that is vitally important at this level.”

For Tipp, it is all about deepening the artillery. Internal competition is the best deterrent against complacency, and Michael Ryan has done a masterful job of reimagining Tipp as All-Ireland champions while deflecting the attendant pressures of being champions elsewhere. Darragh Egan remembers the euphoria generated by the 2010 win – heightened by an obliterating performance in the under-21 final against Galway a week later.

“Everyone thought: Oh, here’s 15 young fellas coming now. And it doesn’t fall like that. I think Brendan [Maher], Paudie [Maher], Mickey Cahill: all these fellas deserve massive credit for riding out the tough times after 2010 and changing the mindset after September last year. They realised the squad would have to work 15 per cent harder after winning just to get to stay there. That is one comparison you can make to Kilkenny: they are working hard. I wouldn’t rush to make the others. But they did keep their heads down and started to work.”

Now involved with the Tipperary under-16 coaching management, Egan is optimistic that the county is travelling in the right direction when he looks at the juvenile set-up.

“They have some very good ASH [Advanced School of Hurling] programmes. They are trying to keep everyone in the system and trying to develop the hurlers. They bring in outside coaches, so one week it might be Benny Dunne and the next Eoin Kelly and then we take them on for the summer.”

The approach requires patience and constant nurturing. Tipperary have learned the hard way that there is no overnight transition and that talent alone is not sufficient. There is talk of 20,000 showing up in Thurles on Saturday night for the latest joust against Kilkenny. Egan is looking forward to it but won’t read any wider significance into the result irrespective of which way it spins.

“No. Kilkenny showed what they are against Cork. They haven’t gone anywhere. Of course Tipp will want to win and as convincingly as they can but once Sunday evening comes, it will be into recovery mode for the next round of the league. It doesn’t carry any significant weight for what will happen later in the summer.”