Honours even as Tipperary and Kilkenny serve up another classic 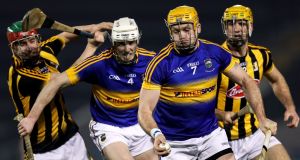 The crowd were nearly as exhausted as the players by the end of Saturday’s barnstorming All-Ireland final reunion in Thurles. Having led for most of the match champions Tipperary were pegged back by Kilkenny and in an electrifying finale either team could have won but ultimately a draw was the most explicable conclusion.

For all the contrasting form and states of existential wellbeing it was hardly a major surprise that the counties produced a demonstration of free-flowing play featuring some breathtaking scores and hard hits. Kilkenny will be thrilled with the intensity of their struggle to stay in contention whereas Michael Ryan will know that the force of the resistance was a useful corrective to the soaring estimation his side has been attracting.

It was uncomfortable enough for Tipp in the end – a sort of memento mori – on an evening that at one stage promised more celebration than relief. But they gouged out the draw in the last minute having fallen behind for the first time in the 66th minute when the ubiquitous Cillian Buckley calmly took his team’s 14th point.

As the familiar names in the home attack – Noel McGrath, Séamus Callanan and John O’Dywer, twice – posted anxious wides, it was left to Steven O’Brien, the footballer-turned-hurler whose form has been encouraging in the Allianz Hurling League to date, to raise a gallop down the right wing and show admirable accuracy to equalise not long after coming on.

A crowd of 14,763 were in Semple Stadium on a balmier evening than most could have hoped for on the way to a match in March. They were treated to some excellent performances. TJ Reid gave a demonstration of goal scoring and ended up with a hat-trick.

His first in the fifth minute was waspishly struck as he arced around the Tipperary defence whereas the other two were penalties hit with such precision and force that they turned Daragh Mooney into a statue on the goal-line.

The first half tilted one way and then the other. It looked at one point as if the All-Ireland champions were about to stretch away into the night after their second goal in the 22nd minute – a dazzling bout of interplay, which saw John McGrath filching the ball and switching it to O’Dwyer who placed a perfect pass to Niall O’Meara – busy and pacey all evening at centre forward – and he tucked it away.

At that point the score stood at 2-7 to 1-2 but for whatever reason the champions lost the urgency and speed that had characterised their powerful opening barrage, starting in the third minute when John McGrath was alert to a ball bobbling around the square.

All of Tipperary’s forwards scored from play before the break but the loss of initiative that allowed Kilkenny back into contention set the pattern for the rest of the match.

Buckley was allowed licence to stray all over the field and gradually the Kilkenny defence – only Paul Murphy started in the same position as last September – came to terms with the glittering full-forward line that had riddled them in the All-Ireland final.

It appeared as if the home side had steadied by half-time and they went in four ahead. Kieran Bergin had replaced Michael Breen to try to restore order to centrefield but Buckley was again prominent after the break.

Bit by bit the exhibition stuff began to happen. O’Dwyer tried to volley a pass into the net but didn’t quite get hold of the shot. Richie Hogan came into the match and would finish with four second-half points, O’Meara burst through on a searing run to kick a point and John McGrath picked up a scrappy ball in the 47th minute and sent it over from around 45 metres and pinned in on the right sideline.

That restored the four-point lead but the next two scores tied it up. Hogan took a pass from a lineball and swept it over and in the 57th minute Reid hit his second penalty after Liam Blanchfield had been taken down by Pádraic Maher.

The scores came tit for tat. Callanan got two – the second from way over on the left, rising in tandem with the crowd crescendo – but Hogan responded on each occasion. John  McGrath carved through and shot for goal but Murphy saved and Callanan’s follow-up was driven wide.

Referee James Owens walked on the wild side by playing a few seconds extra but no harm was done to what was a fair division of the points.