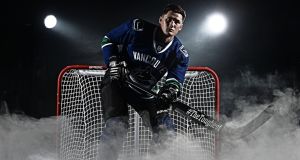 Lee Chin swapped his boots for a pair of ice skates to join NHL team the Vancouver Canucks for a week. Photograph: Inpho

“Enough beer to shock an Irishman, it seems. Now, that’s something.”

Lee Chin’s comments about being surprised at the level of drinking and fighting in professional ice hockey has caused quite a stir in Canada.

Chin’s claims about the drinking culture, and players drinking 24 hours before a match - have irked a number of NHL reporters. But his claim’s about a “change-up” - in which players enduring a slump in form are encouraged to “basically go out and ruin himself for the night, then come back the next day, with the attitude of you just don’t care” - have been questioned.

The ruining themselves part involves being sent out to “drink 20 pints, go off with a couple of women, whatever he wants. And come back the next day. That’s the way they live. It’s the culture, what they believe in, letting off steam like that. I don’t know if they look at the science behind it.”

The comments have led to the president of the Vancouver Canucks - who the Wexford hurler spent a week with as part of the Toughest Trade RTÉ series - issuing a statement to deny the claims:

“Our team recently accepted a request from Lee Chin and a TV show for access to an individual on-ice skills session and a game with Canucks alumni,” Linden said.

“We were disappointed to learn of the comments made in an Irish Times article about his experience. The assumptions made by Lee Chin on hockey culture and reported by The Irish Times are baseless and categorically false. They do not reflect our players, their conduct or the culture of our game in any way.”

An angry Jason Botchford, who covers the Canucks for the Vancouver Province, feels that Chin’s claims have little substance given the small amount of time he spent with the first team.

“Who could make up a story like this? Well, it seems Lee Chin can... There’s just one problem. Chin spent very little time with current Canucks and a whole bunch of time with the team’s alumni.”

Not only does Botchford question the validity of Chin’s claims about a change-up, but he’s not at all happy about the drinking culture claims.

“Generally, (the player’s) bodies are independent, money-making, finely tuned machines. That’s not to say they don’t consume alcohol. I mean, some don’t. But others will have a beer, gasp, the day before a game without concern...

“If you’re incredulous that a grown man had a beer more than 24 hours before a hockey game, you’re definitively clueless.

“About as clueless as someone who gets a chance of a lifetime to spend a week with an NHL team only to later rat out the team with some partial truth and some fake news.”

Stern words indeed. Daniel Wagner from the Vancouver Courier was pleased with Chin’s view on the fighting culture. In particular the phrase, “If a guy is acting the maggot he has to pay for his actions.”

But again, he doesn’t see the issue with the drinking 24 hours before a game - “the drinking the day before a game isn’t the scandalous part of this, except for perhaps that they were drinking Heineken. Come on, guys. There is an argument to be made that elite athletes should avoid alcohol as it impacts training and can make you more injury-prone, but no one’s getting up in arms about a beer with lunch.”

Wagner feels the quotes about a “change-up” may have been exaggerated, but unlike Botchford he knows there is no smoke without fire.

“Let’s be clear: this story came from somewhere. This doesn’t seem like something he would just make up on the spot. Perhaps the Canucks players exaggerated their drinking exploits in hopes of impressing their new Irish friend, buying into the stereotype or Irish drinking.

“And since Chin spent time with Canucks alumni, it’s possible that he was told stories of the “old days” that he misunderstood as applying to now. Perhaps a “change-up” was a tradition in NHL locker rooms decades ago, who knows?”

Sportsnet’s Dan Murphy, who travels with the Canucks also tweeted: “Been around the team a long time, never heard a whisper about a change-up. 20 pints. Caman..”