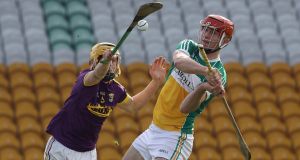 Davy Fitzgerald’s Wexford had to dig deep before seeing off dogged resistance from Offaly in Tullamore to win promotion to Division 1A of the Allianz Hurling League.

Five points separated the sides at the end but it was anything but plain sailing for Wexford, who were way too wasteful for their own good. Wexford hit 16 wides, 10 with a strong wind on their backs in the second half, and had they managed to lose this one, they would have had only themselves to blame.

The visitors had reason to be grateful to their goalkeeper Mark Fanning, who made a stunning 47th-minute save from Shane Dooley’s penalty and had the ace Offaly marksman netted, it would have been very tight.

In the first half, there was next or nothing between the sides, though Offaly did not take full advantage of first use of the strong wind at their backs. The sides were level on four occasions before Wexford made the decisive breakthrough with a great finish from Conor McDonald helping them to a half-time lead of 1-7 to 0-8.

A hard-working Offaly side, who didn’t have a second-half wide, were in the hunt for most of the way. Dooley’s penalty would have levelled it and there was only two in it inside the last five minutes before Wexford got the closing three points to scrape home.

1 Gerry Thornley: Talk of Anglo-French hegemony is over the top
2 What next for green jersey hero Sam Bennett after toughest of Tours?
3 Tour de Covid tells us to cheer, clap and don’t ask questions
4 LeBron James has become this generation’s Muhammad Ali
5 The Offload: Saracens prove Pro14 is not fit for purpose
Real news has value SUBSCRIBE