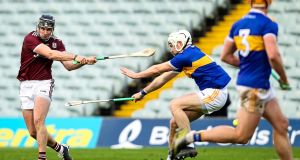 The usual turbo-charged breathlessness from one of the most volatile rivalries in the old sport. Tipperary, the All-Ireland champions, crash out of the winter championship after becoming embroiled in another reckless and hugely entertaining shoot-out against Galway.

The afternoon, bathed in Saturday sunshine, turned when Tipp’s wiry defender Cathal Barrett had to leave the field on a second yellow in the 53rd minute. They exit the All-Ireland in a manner befitting champions, gritty and stubborn deep into the 75th minute and always threatening. But a man down against a Galway team backed by Joe Canning’s extraordinary radar on the placed ball, Pádraic Mannion slipping into superheroic form and the unexpected boon of a 67th-minute goal from corner back Aidan Harte: it was a bridge too far for Tipp.

“We fought like champions. That is all I can ask. With a team like Galway it is always going to be nip and tuck. It has been proven over the years that it is always going to be one score when we meet. Unfortunately we had to play for over 20 minutes with a man down and that was always going to be a tall ask. But we stayed right in it until the end, if we got a break we could have got a goal at the end and shaded it. But I’d be so proud of how my boys went about their business. They gave it everything.”

In truth, had Galway lost this – and there were several times when they threatened to wander off track in the jungle – they would have had a long winter through which to chide themselves. They shot 10 wides over the game and didn’t always make the most of their possession. Five minutes into the second half they were six points adrift of Tipp. In television land, the questions must have been racing through the Galway living rooms. Had they learned nothing from Kilkenny?

But they had. The graduated nature of their second-half revival was the most pleasing aspect of the game for Galway as they prepare to face Limerick in next Sunday’s semi-final, a game that promises thunder and another deluge of scores. They just got on top in key areas, with Mannion, Daithí Burke and Shane Cooney at the coalface of a defensive unit that had given the Tipp forward unit too much space to shine in the first half.

“We are delighted to have a crack next week,” said Shane O’Neill, as polite and inscrutable as ever in this championship.

“I think there wasn’t going to be much of a panic. The wind is strong enough when you are out in the middle of the pitch and we knew if we kept the scoreboard ticking over we would be there or thereabouts.”

The opening period was yet another advertisement for just how attack-oriented hurling has come. The score stood at 2-13 to 2-9 after a free-shooting first half which didn’t tell us anything we didn’t already know about these teams.

All four goals were taken smartly and were born out of half-chances. If Séamus Callanan benefited from Jason Forde’s shot attempt drifting across the face of the posts, the finish was redolent of the captain’s goal-filled championship a summer ago.

At the other end, Joseph Cooney’s attempted point was half blocked: Conor Cooney played Cathal Mannion who jinked through to finish emphatically. In the 33rd minute, Patrick Maher, back in full-industry mode kept plugging to get possession after two point-blank saves by Galway goalkeeper Éanna Murphy to nab Tipp’s third goal.

That score was the grace note on the one true period of dominance in the half, when Tipp strung together 1-4 without reply in a six-minute spell. Galway had enjoyed a four-point lead after just 20 minutes but found their target men stretched and crowded with Tipp’s workhorses dropping deep to smother the attacks.

Noel McGrath shook off the early championship lethargy and moved with impunity through Tipp’s half to strike a nonchalant four points from play. At the other end, Conor Whelan thieved three huge possessions from the sky and was clearly a threat to Tipp. But in such a high-scoring half he finished with no score. Canning fired two wide frees that would have annoyed him but when the season was on the line, late in the second half, he was nerveless.

And as the scores slowed and each error and wide became more significant, the game deepened as a contest. Tipp managed just five more points after Barrett’s departure, including a late free attempt on goal from goalkeeper Brian Hogan. A year ago, in the All-Ireland final, Tipp had benefited when Richie Hogan was red carded for a challenge on Barrett. The irony of Barrett now leaving the field won’t be lost on either side of that electric border. But the goal turned the day maroon.

“We had the ball in front of me,” remembered Sheedy of the day’s fifth goal.

“ Paddy Cadell looked like he was coming out with it. I thought it was maybe a frontal challenge. And that ball was turned over and when they turned it over they worked it to the far side and look, Aidan Harte . . . it was a top-class finish. Their third goal was ultimately the difference in the match.”

It wasn’t quite a classic, too patchy and stop-start for that but it was terrifically exciting and filled with examples of dark class from players on both sides, including an audacious sideline cut from Canning when the game was turning molten.

Sheedy exited the stage stressing that Galway were deserving victors on the day and content that his team have bowed out in a fitting manner. He predicts more daytime fireworks next Sunday.

Shame nobody gets in to see them up close.