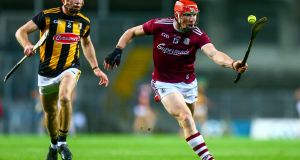 Conor Whelan in action against Kilkenny in the Leinster final. Galway, despite ample possession, have lacked a goal threat thus far. That could be costly against Tipperary. Photograph: Ken Sutton/Inpho

I don’t want to start talking about such a vital weekend by saying that I’ve no idea who’s going to win the first match but Tipperary and Galway has been a hard call now for half a decade.

Part of the difficulty in assessing Saturday’s match in the Gaelic Grounds is that for all the frailties Tipp have shown so far, Galway came back to meet them last weekend after looking so good against Wexford.

I was doubly disappointed by how they failed to put away Kilkenny in the Leinster final and then how meekly they finished despite having steadied the ship when David Burke came in after the two-goal blitz.

As a result they’ve a lot more convincing to do this weekend and are already suffering because of their lapses. I think from their point of view, the big advantage of winning Leinster would have been fewer matches and staying in Croke Park.

Now they’re off to the Gaelic Grounds to play a Tipp team, just coming off a match there themselves a week ago. John Kiely referred to this a couple of weeks back when saying that having experience of match-day protocols was an advantage for Limerick against opposition playing for the first time.

Tipperary will have that advantage. It mightn’t be huge but it exists. In a way it’s why Cork might have preferred to play last week’s qualifier against Tipp in Thurles where they’d played just a week previously.

If Galway are motivated by what happened against Kilkenny they have the wherewithal to put it behind them but I’d be concerned that despite abundant possession in the Leinster final, which gave them a good platform for Conor Whelan and Brian Concannon, they didn’t create much and didn’t score a goal.

That’s grand against Wexford when you’re overwhelming them but against Kilkenny and Tipperary, who are likely to score goals themselves, it spells problems.

Beating Cork was a good step towards rehabilitation by Liam Sheedy’s team but going into a season-defining fixture like this, how good a barometer were Cork? To me they weren’t the heavyweight challenge of previous years and even so they caused real difficulty.

It wasn’t seamless improvement by Tipp who displayed some of the same failings they had against Limerick: poor delivery into the forwards and pressure on the middle third.

The bench had an impact – Michael Breen, Willie Connors and Dan McCormack all performed – but what role was played by Cork playing for a third successive week? The question mark for them is the form of established players in the middle third – Noel McGrath and Pádraic Maher have been replaced in the recent matches.

Ultimately, Tipp have the proven goal threat and even if Galway have a higher ceiling, at the end of the day I just don’t trust them after last week.

The second match is also well poised in my view even though Waterford gave a fine display against Limerick and have improved beyond measure compared to the last two seasons when they couldn’t win once in 10 matches.

This is because I think Clare are now liberated after what was a tonic of a win against Wexford, allowing for how poorly last year’s Leinster champions have played this season.

They have bounced from one match to the next with Tony Kelly in unbelievable form and it’s fair to categorise this as already a decent campaign for them, given the injuries and other absences. They’ll have no fear of Waterford anyway and this is a great chance for them to get back to the All-Ireland semi-finals.

At this stage they can take some comfort from Limerick’s progress, as they stayed with them in the first match for nearly three quarters of it. Brian Lohan has handled the challenges well and the panel is buoyed up with progress so far.

The manager’s relationship with Kelly, going back to the UL Fitzgibbon days, looks to me to have really helped get the best out of him. He’s threatening these days to become again the player he was always capable of being – and sometimes has been.

Liam Cahill knows that he’ll need to limit that influence. Conor Gleeson has in the past been their go-to man marker but hasn’t been featuring as a starter so far this season. In Cahill’s situation I’d look inside the first team and deploy Austin Gleeson to tag Kelly.

The former has been roaming a bit in the forwards to date and ultimately was taken off last week. To me he has the physical capacity for the task as well as the hurling prowess and it just might be the challenge he needs to focus his game – no greater challenge either, at the moment.

Clare also have potentially better back-up in the forwards with Shane O’Donnell and Aron Shanagher than Stephen Bennett, who has also been exceptional for Waterford, has.

Of course, Waterford did better than Clare against Limerick. Their defence, impeccably led by Tadhg de Búrca, who for me would be a loss of influence if tasked with man marking Tony Kelly, was impressive in the Munster final and the work rate of their system is off the charts.

Clare are also facing into the problematic third week running in action and even if there’s not much in it, I’m taking Waterford.