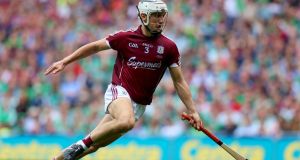 Daithí Burke is back in harness with Galway as they take on Tipperary in Saturday’s All-Ireland hurling quarter-final. Photograph: Tommy Dickson/Inpho

What’s the trend here? Tipperary have struggled all year and whereas the triumph in adversity last week against Cork was good for the soul, was it one of those transformative qualifier wins that changes the trajectory of a season? Key to this will be the impact on Galway of the Leinster final and how they made the title disappear – or how Kilkenny conjured it off them.

The instinct here is that Shane O’Neill’s team will bounce back and, maybe in doing so, lose some of the flabbiness that left them within range despite having had a comfortable share of the provincial final. Team selection will again strengthen with both Daithí and David Burke now back in harness.

Tipp still have that inside line potency that can turn matches and Jake Morris is a live goal threat – a capability Galway could do with acquiring. The champions have beefed up around the middle and improved but they’re up against statuesque opponents who can move well, hurl and who should be fired up after last week’s calamity.

Clare v Waterford, Páirc Uí Chaoimh, 3.45pm – Live on Sky Sports Mix. Referee: Paud O’Dwyer (Carlow)
Clare are outliers in the quarter-finals in that by getting to the last six, they have in difficult circumstances had a satisfactory season. Brian Lohan will see no reason to stop now and welcomes back David McInerney from suspension and hopes to have Aron Shanagher back after injury.

Waterford have surprised a few with their improved displays and, although they look likely to be without Shane Fives, their defence was good in the Munster final with Tadhg de Búrca running the show and Conor Prunty sticking to the task with Aaron Gillane. Manager Liam Cahill’s big worry is how to handle Tony Kelly. Might the man marking be given to Kieran Bennett, who toiled after Cian Lynch a week ago?

Will it work given the Ballyea maestro’s form? Will anything work? Waterford are a step up on Wexford and it will be a surprise after weeks of notice if there’s no better plan of containment. It could be closer than the odds suggest but Waterford merit the favourites’ tag.

LEINSTER SFC FINAL
Dublin v Meath, Croke Park, 7pm – Live on RTÉ 2. Referee: Derek O’Mahony (Tipperary)
The truncated championship lends an air of menace to the season, as Kerry found out two weeks ago. Apart from the opening half against Westmeath – and that was helped by wayward opposition kick-outs – Dublin haven’t looked their lethal best.

They face a Meath team that stuck with them doggedly in the league in October and in last year’s Leinster final, made things massively hard on themselves by shooting 11 wides in the first half, wasting some fine defensive work that kept the champions to 0-5. Meath’s finishing has improved and they’re settled and hopeful of improvement.

Dessie Farrell will probably want to start mobilising his first-choice team with All-Ireland semi-finals awaiting the winners here in a fortnight.

Will Paul Mannion and Brian Howard step into the team as it steps up? Meath really need a steady start: defensively as good as last year, no awful wides and no Santa Claus restarts to get Dublin up and running. Meath to rattle the odds rather than defy them.

MUNSTER SFC FINAL
Cork v Tipperary, Páirc Uí Chaoimh, 1.30pm – Live on RTÉ 2. Referee: Maurice Deegan (Laois)
It would have taken very little for either of these sides to have missed out on this final. Mark Keane’s goal to beat Kerry was snatch-and-grab to the max; Conor Sweeney needed the free of the championship so far to keep Tipp alive against Limerick and they were blessed not to have to go to penalties at the end of extra-time.

Now that they’ve both come through near-death experiences, they owe themselves a real rattle at the title here. Cork’s semi-final was obviously higher-level stuff than Tipperary’s but they have since lost Seán Powter, the source of so much of what was good against Kerry. Tipp have gained Colin O’Riordan in the interim, the Sydney Swans player who last lined out for his home county in 2015.

Cork are driven, united and organised. But they haven’t been weighed down by expectation in a while. If they don’t handle it properly, Tipp are dangerous here. But you can’t beat Kerry and not win the final. That would be a disaster too far even for the Cork footballers.

ULSTER SFC FINAL
Donegal v Cavan, Athletic Grounds, 4pm – Live on RTÉ Two and BBC Two. Referee: Barry Cassidy (Derry).
It hardly needs saying that Cavan would be better off not needing to showcase their facility for a comeback quite so often. As they rise through the ranks, so the hill gets steeper. Making up seven points against Monaghan and 10 against Down is all very well but they gave Donegal an eight-point headstart by half-time of last year’s Ulster final and never came close to reeling them in.

So their job here is fairly obvious. Donegal’s reputation probably exceeds their skills, such is the wider need to find a serious opponent for the Dubs. But they have managed their way through Ulster without needing Michael Murphy to be outstanding and only bringing Patrick McBrearty in as an added extra. They will want to get the business done early but might find themselves inconvenienced by Cavan’s aerial ability around the middle.

Donegal should come through but Mickey Graham’s side warrant respect. This will be no cakewalk.