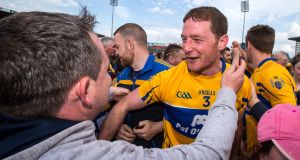 Pat O’Connor with former manager Davy Fitzgerald in 2016. “I’ve come up against Davy a few times now, and after the match, do go up and put my arm around him, it’s almost second nature.” Photograph: Cathal Noonan/Inpho

How gently ironic that Pat O’Connor is on a Zoom call being asked about that old shadow which still looms large over Clare hurling right around the same Davy Fitzgerald is on Wexford radio having a go at his former manager Ger Loughnane.

Why, as Rodney King might have asked, can’t they all just get along?

It’s become increasingly tired ground and even for the likes of O’Connor, who was four years old when the Clare team of 1995 won a first All-Ireland hurling title for the county in 81 years, before following it up again in 1997.

It’s not like Clare haven’t won anything since; O’Connor was part of their 2013 All-Ireland winning team, managed by Fitzgerald, and Clare have also won three successive All-Ireland under-21 titles in the last decade, and still it feels that almost everything that happens on and off the field is set against the exploits of ’95 and ’97.

“I would agree,” says O’Connor, “and have often thought about this. Sport aside, it was such a landmark time for Clare. We hadn’t achieved very much in the way of sport, and next thing you had a panel of players that were sort of parachuted in on a national platform.

“And a lot of people when they talk about Clare hurling still talk about 1995, because it was such a landmark year, and really brought the county into the front and centre. And there is still a residue of that, in that they were the men that broke the mould.

“So the shadow does loom large, but I would hope going into the future they become more involved in Clare, leading the county forward, be it coaching or administration, because there is such force of personality there, and such knowledge. You’d like to think they could all come together and unite and just drive the county forward.”

Whatever about Fitzgerald’s latest slight at Loughnane on South East Radio on Tuesday morning (“I don’t actually hate Ger Loughnane, I just feel sorry for him,” he said, referencing Loughnane’s own newspaper column where he had a go at Fitzgerald, who now manages Wexford) there was a more unpleasant shadow looming over Clare’s qualifier game against Wexford last Saturday.

Current Clare manager Brian Lohan appears to have irreconcilable differences with Fitzgerald, despite them once being the last line of the Clare defence, and after Wexford’s defeat last Saturday, Fitzgerald also claims to have endured verbal abuse from an unnamed individual in the stand, and called on the Clare County Board to look into the issue.

For O’Connor, the Clare defender in his 10th senior season, there will always be a special relationship with Fitzgerald, given his role in their 2013 success: after Saturday’s defeat, a number of the current team did console their former manager.

“For myself, and maybe Brendan Bugler as well, it’s definitely strange. I’ve come up against Davy a few times now, and after the match, do go up and put my arm around him, it’s almost second nature.

He’s obviously on the other side now, but in fairness to Brian Lohan, he kind of addressed it at the start of the week, that there was a kind of rhetoric going on there between Davy and himself, which is totally to with them, and it’s not our place to get in the middle of it. I know what has happened, but it’s between them, and had nothing to do with the result or the build-up last Saturday.”

In the meantime O’Connor has been enthralled by Lohan’s first season as Clare manager, hailing a similar sort of influence from the former full back’s playing days.

“I’ve thoroughly enjoyed it, you look at the dates of birth of some of the lads here now, and they weren’t around for ’95 or ’97. I was a child of that era, and in the years I was most open to influences, Clare hurling was the only show in town for us.

“When you think of Clare hurling back in the day, you inevitably think of Dalo [Anthony Daly], Seanie [McMahon], and Lohan, and when you’ve seen the player he was, and now the manager, he’s just so comfortable, and confident, and you know if he picks you he has total confidence in you, which results in you having that confidence in yourself as well.”

O’Connor and Clare will need more of that confidence this Saturday, for their All-Ireland quarter-final against beaten Munster finalists Waterford. Liam Cahill’s team showed plenty of fight and promise in the four-point loss to Limerick in Sunday’s Munster final, Clare losing to Limerick by 10 points last month.

“We were bitterly disappointed after the Limerick game, waking up at four or five in the morning, realising you’ve just lost to Limerick by 10 points. But we took what we could from it for the Laois game, and at spells I thought we played well, and at spells we essentially looked like what we are, a lot of new faces, a lot of new players in new positions.

“If we take the field on Saturday, and aren’t up for it, we’ll be very, very disappointed. We absolutely have to back it up now, find some consistency, a base level that is non-negotiable. But last Saturday brought more reassurance that it’s an upward curve, and we’re going in the right direction.

“Brian knew that, he needed to find some depth, being without four or five very influential players. And for some of the younger players who haven’t made championship appearances yet, so to see them come on again, that’s the real difference after a loss.”

No shadow over them either, not yet anyway.