Jim McGuinness: Dublin will be wary of Mayo team that don’t take no for an answer 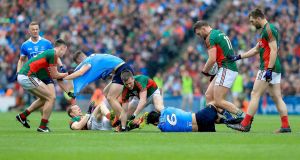 It struck me during the week that although there are three provincial finals being played this weekend, many conversations involving the All-Ireland championship seem to project beyond those games towards bigger encounters that may or may not happen.

The common thread in these conversations is whether any team can stop Dublin. It’s a familiar theme by now. I think that’s what the All-Ireland has boiled down to, in much the same way as it pre-occupied the hurling landscape when Kilkenny were indomitable.

The general view seems to be that a Donegal-Dublin semi-final could be an amazing game. And that view is inevitably quickly followed up with the thought that Mayo could be a dangerous team for Dublin to meet in a final. So the unspoken assumption is that Dublin, by hook or crook, will ultimately beat Donegal and get to the final. And that Mayo, then, will be there to meet them.

It could happen and going on form, it’s the most likely outcome. But it’s presumptuous on a lot of fronts, which has been borne out by the shocks we have had already in the championship.

What struck me watching Dublin last weekend is that there is a vague sense that they are starting over again. Last year, you couldn’t move without talk of the five-in-a-row. This year, they are going for six on the trot so it should be a continuation of the story. But once the magical number of five was attained and Jim Gavin stepped down, it felt like the completion of something: that the slate was wiped clean.

So are Dublin going for their sixth All-Ireland or their first under Dessie Farrell? Is this a new era? Well, I saw Dublin up close last weekend and was taken aback by how smoothly they seem to have continued in the same vein. To my mind, there is not one part of their game plan where there is a chink. That is the level of form and consistency they have created.

I watched what they were doing off the ball and their overall athleticism and how they communicate and their implementation of the game plan, which was relentless irrespective of the score. They put up 2-23 and as we saw, Cormac Costello came in to kick 0-7 off the bench. I think they are holding Paul Mannion back until later in the competition. They have a huge wealth of experience in how you win All-Irelands. And that is massive.

There is no gap there. It is a continuation.

What is different, because of unforeseen circumstances, is the backdrop. This is a condensed, knock-out All-Ireland played in winter. It is going to take something very special to beat Dublin.

And yet. And yet. There is hope within the country that there are a couple of viable contenders emerging out there.

On the surface, Donegal are such hot favourites to win their Ulster final against Cavan on Sunday that it should be a very dangerous game for them. But because I know the people within the group, I feel certain that the Ulster championship is still huge in their mindset. They just want to get over the line. The Ulster final remains a huge prize in Donegal. The respect the group has for the occasion and the opposition means they won’t be complacent. They have a chance to win three-in-a-row and for some players, it will be their first final. It’s a big deal.

Where Donegal have made great strides is that the younger lads are getting better and more experienced while the senior players are holding their form. And because it is a possession-based game now, Shaun Patton gives them an excellent platform to retain possession. They have excelled on pushing up on opposition kick-outs. So you can see why people are projecting to a potential semi-final meeting with Dublin. They have earned the right to be considered as a genuine challenger. But I’m certain they will only turn their thoughts to this if they have the Anglo-Celt back in the county on Sunday night.

And they have issues to deal with. They are stretched badly in the back line because of the injury to Stephen McMenamin and Paddy McGrath not yet fully fit – which accentuates the importance of Neil McGee to the side. Hugh McFadden departed injured against Armagh and he is revelling in a winter championship. But Donegal, young and old, are heading in the right direction.

Mayo are also interesting. When I think about Mayo, I am reminded of an incident that happened to me when I was a kid. It’s funny to look back on but was not at the time. I was about 12 and there was a gang playing football on the green. There was a heavy tackle and a bit of grousing and pushing. And then all of a sudden this boy threw a punch at me and the next thing we were fighting. And before you know it you are encircled by eager spectators.

It happened a lot, these sporadic scuffles during the 1980s. Young people back then lived in these communal playing areas. And there were sparks. But this wasn’t a scuffle. It kept going on and on. It became a fight. It felt like an eternity. But eventually it petered out and he ran into his house. And you are feeling great just because it’s over. And then, from nowhere, I hear this crazed roar coming out of the same house and my opponent came charging out the front door.

And before I know it, I’m in round two through no choice of my own. Mercifully, he retreated again. And I just wanted to walk away. But you can’t do that straight away because of the peer group. And then, to my disbelief, I hear the same roar and he comes flying through the front door again even more keyed up. And I started thinking: how do I end this? It stopped after round three but it has always stayed in my mind because it was such an alien event for a young boy.

And I feel Mayo are a bit like that with Dublin. They keep coming again and again and again. Dublin think it is over and that they are done with Mayo and can get on with their lives. And then Mayo come charging out of nowhere. They are not taking no for an answer. There is an unpredictable element to this dynamic and also unfamiliarity because Mayo have introduced so many new players. So this is not the Old Mayo.

And remember how close their games against Dublin were? (How valuable were the Hill crowd then?) They were steadfast in their belief system. And they had no fear. They believed in their hearts that they could and would beat Dublin. That is the essence of the psychology of sport. You have two teams going at it and it is always the response of the team in adversity that matters.

For instance, if Dublin score a goal and Mayo’s players start turning on each other, that is where Dublin will smell blood and that’s where they will put in the knife and turn it. But if Dublin score and Mayo change nothing in their approach, then the Dublin lads are thinking: these guys aren’t gone. And they know they are still in the battle. Mayo have very rarely given Dublin the opportunity to turn the knife. They fought to the bitter end through all of that time.

And you look at them now and how they used lockdown and the new players they have introduced and that unpredictability. If the Dublin-Mayo final does materialise, they are suddenly faced with Mayo charging out the front door yet again. And that could be unnerving.

But for all the conjectures, this weekend’s finals must be played and won.

Cavan have shown true grit and are playing six weeks on the trot to make it to the Ulster final. Cork have produced the shock of the championship so far. And to my mind, Meath are carrying a goal threat now that they didn’t have before. And goals are a dangerous thing in knock-out football. All neutrals will be hoping that Andy McEntee’s team can carry that goal-getting capacity into the Leinster final. They have had a few punishing experiences against Dublin and it would be important for the development of their team that they land a few blows of their own.

So we may well have those heavyweight conclusions later in the All-Ireland. But for now let’s enjoy the novelty of three provincial finals over one weekend – with no safety net.